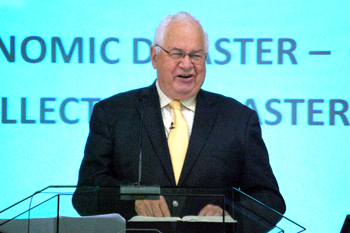 CLARKS SUMMIT, Pa.—Dr. Walter Kaiser was the featured speaker for Baptist Bible Seminary’s 19th Barndollar Lectureship Series, speaking at a series of college and seminary events on the theme “God’s Future for Israel and the Near East.”

“The students found a scholar who could also speak to an 18-year-old,” says Mike Stallard, dean of the seminary. “He modeled expository preaching.”

“He reinforced the literal interpretation of the Bible, a distinction between Israel and the church, and a future for national Israel,” Stallard says of Kaiser’s lectures. “With all of the events going on in Egypt and Libya this week, his sermons were well timed.”

Now retired as president of Gordon-Conwell Theological Seminary, Kaiser began his career teaching Bible and archeology at Wheaton College. He later taught at Trinity Evangelical Divinity School, where he was senior vice president of education. While at Trinity, he taught many pastors and professors who would become leaders in the GARBC. His books have been enormously influential with GARBC pastors, especially his Biblical Exegesis for Preaching and Teaching.

The Barndollar Lectureship Series was established in 1993 in memory of W. Walker Barndollar. The annual event allows students and faculty to meet and interact with well-known, respected theologians and teachers on important theological matters. Pastors and other community members also attended Dr. Kaiser’s lectures.