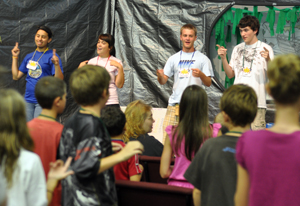 LAKE IN THE HILLS, Ill.— Twelve years ago, as a church planter serving with ABWE, Mark Wood had the privilege of helping to start New Life Baptist Church. VBS has been most effective in developing people into disciples of Christ. During its early years, the church depended on youth groups from other churches to hold VBS, but now at least half of the church family is involved in serving in some way, and nearly the whole youth group of 15–20 teens were involved in the program (and fulfilled some key leadership roles). Many of the teens who were serving attended VBS as children and are now giving back to the program.

Jazmin, a teen who is headed off to college in a week, says, “This whole summer and especially the week of VBS, the prayer on my heart was P.L.U.M. (Please Lord Use Me). VBS was a week of stretching me beyond my comfort zone. This was my first year as a teacher. The week before VBS, my youth group leader asked me to fill in for puppets because she was short on volunteers. I was not sure I could handle that as well as teaching pre-primary level. In the end, I agreed. Then Pastor Mark approached me and my friend, Layna, and asked us if we would be willing to help out with singing. I can’t sing to save my life. But I decided that I could help teach the kids the motions since I knew them by heart. Despite stage fright, low turnout on some nights, and antsy kids, I was content that I had been pushed outside of my comfort zone, pushed beyond what I thought I was able to do. I was so happy when I heard how one of my kids really took in the salvation message and understood what it meant to sin. After disobeying his mom one evening, he came back later and apologized on his own and acknowledged his actions. I was in awe after I heard this story. God was able to use me to touch someone’s life.”

A number of whole families served during the busy week. One father, Dave, says, “I have always enjoyed working with kids. Their personalities really show forth at their young ages, before adult stresses and life in general has squelched them. Their minds are so sharp and impressionable, clean slates, not fully aware or marred with the enormity of sin’s affects on the entire world. I teach a Sunday School class for fourth and fifth grade kids. All of them are professing Christians. We get very deep into some lessons because they are past the easy questions. I am very proud of them. During VBS, I taught fourth, fifth, and sixth grade kids. The class size varied from 10 to 18 kids.”

During the first half of the week, the kids studied how much God loves them; during the second half they learned how they can show their love for God.

“Most of the kids,” Dave says, “were professing Christians or had a church background, but I specifically remember one boy who attended only Thursday. As I began the review I noticed his eyes fixed intensely on me as I was teaching. That current day’s lesson was about the rich man who stored up treasure for himself and then found the days of his life were over, having shown no gratitude or love for God throughout his life of being blessed by God.” Dave hopes that he will see this boy come to Awana.

Dave’s wife, Sue, helped during snack time each day. “During this more relaxed time of the night I was able to talk to the kids one-on-one,” she says. “I was able to review their Bible story and was glad to see how kids progress in sharing by the end of the week, being so excited about what they learned.”

Two of their teen boys were involved with the game time, and enjoyed watching the kids being kids. Playing the games gave the younger kids an opportunity to see how the high school kids took an interest in them.

Another helper, Chris, enjoyed serving alongside her daughter. “This has been our third year together. After each night was over, I enjoyed listening to her on the way home—how she helped share God’s love with the kids and helped with their crafts. I am truly grateful for this opportunity.”

Mary Ellen, chairperson of crafts, enjoyed “working with kids of different age groups” but found that the kids were not the only ones learning God’s Word. “Even while working on crafts, we had the opportunity to ask questions regarding an event during the opening session, be it a Bible verse or the puppet show, delivering a message of God’s Word. I find by helping with VBS I also learn more about God’s Word.”

For Kevin, the week reminded him of his late wife’s love for VBS: “Debby, my wife, who passed away earlier this year, always enjoyed VBS.  I think she would have liked this year very much. I really was inspired and had fun with leading the games and doing the skits.”

Marge Taylor, who invites her grandchildren to participate in VBS each year, loves “helping out and seeing all the kids that come back year after year.” She says, “This year I helped with registration and was able to get caught up in the excitement of friend week, pajama day, and crazy hair day. Their excitement is infectious. I have three grandchildren that attend VBS along with a few of their friends. They told me how they really liked the skits. I love our church and the way everyone pulls together to do whatever it takes to see to it that everyone that comes to VBS has fun learning about the Lord and all the blessings we have. God wants us to love one another, and I see this in every activity the children do and they give freely to the ones that don’t have the things we do.”

After VBS was over, the church received a phone call from the mother of one of the children who was invited by a friend. When she introduced herself, the fear was that she was going to relate a negative experience from the week. However, she communicated that her daughter “absolutely loved everything about the night.” She was wondering if her daughter could come back again.

Serving in VBS blesses workers in many ways. Director Rodney says, “First, the chance to have a weeklong fellowship with the participants is awesome. We always learn so much about what is happening in each other’s lives. Second, the occasion to use our skills and resources to spread the gospel is amazing. We always feel so satisfied after the week to know that we used the talents that God gave us for His glory. Third, the opportunity to plant the seeds of His Word in the minds of others is a wonderful task. Knowing that we shared the good news to others is gratifying. Vacation Bible School allows us to put our faith to action, and that is a magnificent thing.”