V. Ben Kendrick with the Lord 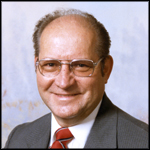 For his entire life, Ben lived and breathed missions. He and his wife, Nina, began their long career with Baptist Mid-Missions in 1949, starting in what was then French Equatorial Africa, now Central African Republic and Chad. The Kendricks served first in Chad in evangelism and church planting. For the remainder of their tenure in Africa, they worked in Central African Republic. Their years of church planting there were punctuated with ministries as dorm parents, Bible school teacher, and field business manager.

In 1973, the Lord directed the Kendricks to the home office, where Ben served in the Deputation Department (church relations). His former secretary, Sallie (McElwain) Lemponen (Emeritus-Women’s Department) wrote, “There was no person, young or old, in whom Ben Kendrick didn’t see potential for service. [He] was constantly thinking of new programs and innovative ways to promote missions, especially among the youth. And whatever ministry he conceived, he was ‘all there,’ giving of himself 100 percent.”

After retiring from Baptist Mid-Missions’ deputation department in 1989, Kendrick continued to serve for several years as a BMM special representative. He never retired from ministry but gave his time in preaching and camp ministry as well as serving as administrator and teacher at Indiana Baptist College. He loved to tell missionary stories and wrote eight books, one cowritten with Nina. Six of these were published with Regular Baptist Press, including Battle for Yanga, Buried Alive for Christ, Not Beyond Reach, The Storyteller, World of Treasure, and Yanga: The Miracle Village. He also wrote articles on missions for the Baptist Bulletin.

Dr. Gary Anderson paid this tribute to Dr. Kendrick: “It would be impossible to calculate the number of lives touched by [the Kendricks] in that distinguished missionary career. And it would be difficult to find anyone who had been a more passionate champion for missions than Ben Kendrick.”

Ben was preceded in death by his parents and his brother Marvin.

Read two articles written by V. Ben Kendrick and published in the Baptist Bulletin: “The New Missionary and Church Support,” and “At Work in the Central African Republic.”

Previous post A Refined Version of the Sine Qua Non (Part 4 of 4---Theology: Method and the Essence of Dispensationalism)