True to the End 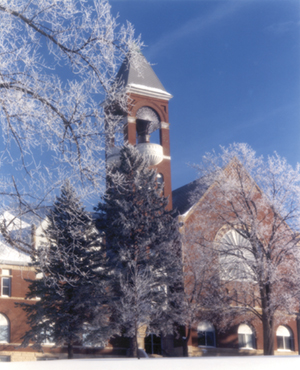 Dec. 12, 2008, the last day of the semester! The gray skies and beautiful blanket of white snow on the ground, so typical of Minnesota the weeks before Christmas, reminded me of the last day of my first semester 43 years ago. I had spent the afternoon in my dorm room getting ahead on my Scripture verse memorization for Personal Evangelism class. Occasionally I would look out the window for Dad, who would take me home 90 miles away for Christmas break.

Now it is my turn to take someone home for Christmas break—our freshman daughter, Julie. But while I returned to the college after my Christmas break in 1966, Julie will not be returning in 2009, not to the same college.

Today is the end of 52 years for Pillsbury Baptist Bible College, Owatonna, Minn. A bastion of Biblical Christianity since 1957, Pillsbury has been forced to close mostly due to the current economic situation and a less-than-anticipated fall student enrollment. The closing has been a difficult, yes tearful, time for everyone involved—students, faculty, administration, parents, churches, and supporters.

Yesterday, the day before campus closed, I had the opportunity to interview Greg Huffman, president of the college. “All of our hearts are saddened by the events of Pillsbury Baptist Bible College,” Huffman said. “For 52 years we have seen hundreds and hundreds of students leave our halls and go out into the harvest.”

Pillsbury has an unusual history, its beginnings tracing to events even before Minnesota became a state in 1858. Chartered as an academy by the Minnesota Baptist State Convention, the school name was changed to Pillsbury Academy when George Pillsbury, flour baron and former mayor of Minneapolis, sponsored the construction of the Owatonna campus.

The early 20th century struggles between religious liberalism and fundamentalism affected the school greatly, with the modernists trying to hold onto the school, while fundamentalists realized the potential for a school to train young people for the Lord’s service. Finally the Minnesota Supreme Court declared that the fundamentalist-controlled Minnesota Baptist Convention was sole owner of the school, holding exclusive rights to elect the trustees. Truly it is one of few, if any other, schools that have been “rescued” from modernism. Schools that have changed ideology over time typically have the opposite history.

Ironically, I wouldn’t be writing this tribute if I hadn’t attended Pillsbury. Matriculating as a non-Baptist, I soon developed convictions concerning Biblical, dispensational theology. Further, the school trained me in other useful areas of service besides doctrine. Over the years I have come to appreciate this training more and more, so my wife and I were elated when Julie chose to attend. The school fit her like a glove.

Had we known Pillsbury would be closing at the end of the semester, we would have wanted even more for her to attend, since this past semester became our only opportunity for one of our four children to attend my alma mater. Julie and various faculty members have told me that the student body has had unusual unity and profound blessings this past fall, as though the Lord was preparing them for the closing. I understand that one student trusted the Lord as Savior as a direct result of the announcement. Surely the students’ experience of watching their school close will be used of the Lord down the road in ways unknown to us.

“The lessons our sweet Lord has been teaching us during these trying times are so awesome,” Dr. Huffman said, noting the spiritual growth of the students and faculty during the last semester. Over the past few months, he often said to the students, “If God brings you to it, then He’ll bring you through it” as he encouraged the campus family.

“It is not what we go through, it is how we go through it that really matters,” Dr. Huffman added. “We have focused on the importance of going through trials by staying in the Word. We’ve said that they must stay in the Word until they see Christ in their crisis, and come out victoriously.”

When a former Pillsbury dean of students left the school many years ago to serve the Lord elsewhere, he said, “Pillsbury will always be my school.” I feel the same way. The school will live on in our hearts and memories, and the spiritual results of many graduates and former students serving the Lord will continue. Only eternity will reveal the good that came from this institution.

“I’ve told our students not to bemoan the fact that our experience at Pillsbury Baptist Bible College has to end, but to rejoice that it happened at all,” Dr. Huffman said.

I agree. I would rather be an alumnus of a school going down while standing true to the Word than a school with giant coffers, plenty of students, and a “secure” future—but no longer sound, no longer taking the stand it once took.

My wife and I drove up to the college last weekend for special activities including the last Christmas banquet and concert and the last basketball games. The fellowship was great and happy, amid sadness.

“It has been a joy beyond description to serve as president for this last semester,” Dr. Huffman said as we concluded our conversation. “Let’s live faithfully to the end, finishing well, and look forward to the days we’ll all meet in Heaven. Perhaps God will grant us a little corner in Heaven—the Pilly corner—where we can gather again and recount all the blessed things God did in our lives as we spread around the globe serving Him, because it’s all about knowing God.”

On the hills of Owatonna, ’neath skies of azure hue,

There stands a mighty fortress of the truth our fathers taught,

O God, we stand in awe of the work which Thou has wrought.

From jungles far away, from town and hamlet small

Come cries of souls sin-bound and doomed to endless woe.

All your hearts with love aflame, Arise to let them go!

Norm Olson is senior editor of the Baptist Bulletin.

“I believe that this merger has the potential of carrying our Atlantic name and mission further than anyone could have imagined,” wrote President Paul Monroe to his alumni, “so I view this more as a new beginning than as an ending. Atlantic’s original vision of training leaders to serve Christ can now be realized with a much broader scope.”

In 2003, Spurgeon Baptist Bible College merged with Piedmont, resulting in the creation of the Spurgeon School of Online Education. More than 200 students took at least one online class in the 2007–08 academic year.

Next post At the Center: The Theology of Compassion