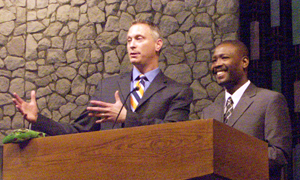 TOLEDO, Ohio—What might the director of an orphanage with over 215 children look like? One may call to mind the frazzled Old Woman Who Lived in a Shoe, who had so many children she didn’t know what to do. In that nursery rhyme, she gives them broth without any bread. She whips them all soundly and sends them to bed! But the congregation of Emmanuel Baptist Church discovered Haitian Pastor Prédestin Pierre Hérard is neither frazzled nor rash. During a visit to the church’s recent missions conference, Hérard embodied the qualities the apostle Paul exalts in Ephesians 4: humility, patience, kindness, and compassion. And above all he is joyful, radiating a broad smile that envelops his face and shines from ear to ear.

Unexpectedly, just before departing, the smiling director of My Father’s House orphanage fell short a needed document. His flight had to be rebooked, and he missed the opening of the conference. Leaving the earthquake-devastated island, Pastor Prédestin arrived in the United States late Monday night. Tuesday, tornado strength winds whipped Toledo and a great part of the nation’s midsection into a frenzy. Trees swayed, lights flickered, sirens blared, but Prédestin continued to smile. When missionaries invited him to join them in the basement of the missionary house, he showed no fear and waited out the storm upstairs.

Though he speaks English as a third language heavily influenced by his native Creole and French, Pastor Prédestin did not shy away from addressing different groups in the Toledo church. He spoke to the children and teens at the Christian school and to the Awana clubbers at night. He visited the zoo and traveled to people’s homes. He spoke to the missions committee and the congregation, and answered questions in an Adult Bible Fellowship. All this he did while smiling, nodding, and being upbeat. He mentioned the cholera that to date has taken over 300 lives. He did not paint a grim picture, nor did he make appeals for funds. Instead, he told how the earthquake has brought many people to his doorstep, asking why their house was the only one on the street left standing after the earthquake. “What God do you worship?” people asked him. The spiritual interest in Haiti has increased. Laughing, he says, “It would be good if God send some tremors every 30 days or so to remind the people to follow Him.”

But the facts remain grim. Of the 120 Baptist churches throughout Haiti that he helps oversee, 50 are in Port-au-Prince. Twenty of those 50 churches were destroyed. Most pastors live in their churches, using primitive outdoor fires as their kitchens. These pastors have lost their houses as well as their churches. One and a half million people in Haiti now live in poorly supported “tents” (sheets of plastic). And rains and now a hurricane threaten to destroy more. The AP reports that only 2 percent of the rubble from the earthquake has been cleared away. The surviving government is making little progress to help the people.

Haiti had not experienced an earthquake in over 200 years. That fateful day Pastor Prédestin was walking down the street when he heard earsplitting cracks and felt the ground shake. He concluded that it was the judgment of God and that the Rapture was the next event. When he witnessed cascading buildings and rippling roads, he understood an earthquake had occurred.

His immediate concern was for the children of My Father’s House. Houses throughout that neighborhood had been decimated like building blocks in the hands of a rambunctious toddler. But My Father’s House stood strong and tall. Once he was certain that the orphans were safe, Prédestin made efforts to find his wife and daughters.

Children under the age of 15 make up almost 40 percent of the population in Haiti. The country now has 60 percent more orphans than before Jan. 12. At present My Father’s House—which accepts only true orphans—sleeps three babies to a crib, Prédestin reluctantly reports. Workers change the babies’ cloth diapers three times per day. Because milk and formula are scarce and costly, pureed rice is fed to these little ones. My Father’s House had three locations before the earthquake. Because the children’s school was destroyed, one of the buildings has been commandeered to be the school, further cramping the growing brood. (Before the quake, the government was able to educate only 5 percent of the population.) The orphanage is renting an additional house. Furthermore, a used truck was procured to transport food, medical supplies, water, mattresses, beds, children, and more. But with increased poverty comes an increase in crime, and unfortunately the truck was stolen at gunpoint.

However, there is a reason Pastor Prédestin continues to smile! Land has been purchased on the outskirts of Port-au-Prince in Petionville. It is enough land to hold 500 children. Efforts are under way to put in a foundation. While the vision is great, so is the financial need. Approximately half a million dollars will be needed to complete the vision. Not only will the children need a place to put their heads at night, but clean water, adequate restrooms, a school, a chapel, a kitchen, and much more need to be established. In addition, when new children come to the orphanage, they bring scabies, lice, bed bugs, ringworm, and other contagions that quickly spread. A separate building must be established to treat incoming children.

None of this seems to rattle this man of God. Caring for hundreds of children, overseeing more than a hundred churches, finding food and water, and meeting the needs of his wife and two young daughters—all of this Pastor Prédestin takes in stride. His confidence is in the One Who knows the stars by name and Whose eye is upon the birds of the air and the lilies of the field.

Pastor Prédestin left Toledo at 5:00 in the morning. He returned with a suitcase of chlorine pills that the people of Emmanuel Baptist purchased to help fend off cholera. He also carried a suitcase of toys and games, like any father returning from a trip would bring. He returned to the clutches of the threatening Hurricane Thomas. The needs of Haiti and My Father’s House are great. But for sure Pastor Prédestin is smiling. He knows the Father of the fatherless, and his trust is in the One Who neither slumbers nor sleeps.