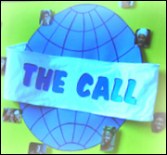 “The Call” was the theme of the 61st Annual Missions Conference at First Baptist Church in Hackensack, New Jersey, held March 4–11. Each year the conference theme is carried out through extensive decorations, and the services themselves are theme-oriented. For “The Call,” the church auditorium featured a British-style full-size phone booth on the platform along with shortwave equipment, a fax machine, megaphones, a bullhorn, walkie-talkies, and a CB radio. Four large simulated-wood utility poles snaked their way from the rear to the front of the auditorium, carrying the wire to the phone booth, which contained a real pay phone. Novelty phones and phone books decorated the window areas of the auditorium under the flags of the conference nations.

At the kick-off banquet opening night, Steve Gaunt, chairman of the missions committee, placed calls to off-site missionaries on speaker phone for the congregation to hear. The missionaries were able to answer questions and give reports directly from their fields. Participating in the overseas phone calls were the Huffs in Kenya (ABWE), the Joneses in Italy (EBM), the Blumenstocks in Singapore (Asia Baptist Theological Seminary–ABWE), the Reillys in Costa Rica (ABWE), and the Rusts in Portugal (ABWE).

During the week, visiting missionaries were “called” to the platform by cell phone, megaphone, or bullhorn.

Over 20 nations are represented in the congregation of First Baptist, and some of the conference music was presented in the Nigerian Yoruba language and in Tagalog from the Philippines.

First Baptist’s conferences involve both the church and its Hackensack Christian Schools (preschool through high school). Pastor James E. Smith II reported that this year’s conference consisted of 125 “slots,” during which missionaries ministered at assigned times to assigned groups. A room was made available to the missionaries, stocked with beverages and snacks and equipped with wireless Internet service. The missionaries’ children were mainstreamed into the school, where they made new friends and had opportunities to share with their peers. “Bring-in” lunches and dinners, provided by church members, allowed the pastoral staff families to interact with the missionaries.

Participating missionaries in this year’s conference were Michael and Heidi Blackwell (ABWE, South Africa); Norm MacKenzie (executive director of New Life Island, Frenchtown, New Jersey); David and Grace Ostman (Mainland China Mission Inc.); Andy and Carol Patton (ABWE, Peru), who ministered to both the English- and Spanish-speaking congregations of First Baptist; Doug and Renate Reiner (BMM, Brazil); and Buddy Robinson (Mark 10:14 Ministries, Inc.), who ministered not only in the main conference but also ran the “Kids’ Konference.” The eight-day conference concluded with a message by Doug Reiner and a dedication of the church’s Teen Puppet Team, whose members will travel to Texas this summer for their annual missions trip. Two adults and two youths made public decisions.

First Baptist is the sending church for fourteen of its members who are currently active as vocational missionaries.

Next post Did They Lie, and Was the Lie Justifiable?