HACKENSACK, N.J.---First Baptist Church is utilizing a new sound system, thanks to church member Stephen Farrell, who remodeled and updated the sound room as his Eagle Scout service project. 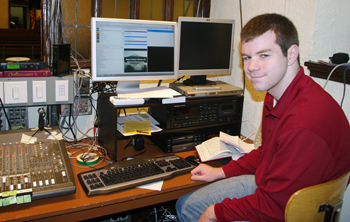 HACKENSACK, N.J.—First Baptist Church is utilizing a new sound system, thanks to church member Stephen Farrell, who remodeled and updated the sound room as his Eagle Scout service project.

“The church sanctuary was originally constructed in the mid-1800’s with no expectation that an electronic sound amplification system would be employed to help attendees hear music or sermons more clearly,” says Paul Farrell, Stephen’s dad and scoutmaster of Troop 113. About 18 scouts ranging in age from 11 to 17 are part of the “faith-based, Christ-centered” troop.

Paul says on the troop’s blog, “When a modern sound system was installed, the only place for a sound room was a converted coat closet at the rear corner of the sanctuary. This seven-foot by seven-foot room became even more crowded with equipment and a second operator when computer projection of visuals were added to the building (to project the words to hymns, etc. on a screen at the front of the hall).

“In order to hear and see what is happening in the sanctuary, three narrow stained glass panels were removed, but the framing was left in place. This created a set of baffles which muffle sound transmission and serve as view blocks to the sanctuary. Additionally, since the sound equipment occupies the front wall of the room, the computer operator was forced to sit facing away from the sanctuary to operate the projection equipment.”

Fund-raising, which Stephen began in late summer 2012, covered the entire cost of the renovations, which included not only updates to the sound system but new furniture and storage options and improvement of sight lines. “The new configuration allows both operators to sit side-by-side and face forward. They can see and hear activity within the sanctuary through the new window opening. New microphones, a new amplifier and a new computer system have reduced background noise and increased the effectiveness of the sound room team as they provide a smooth worship experience during services.”

Next post Can U.S. Conduct Lethal Drone Strike on Its Citizens?