WESTFIELD, Wis.---How does a follower of Christ become a semper fi godly man? To answer that question, men at Camp Fairwood's Laymen's Retreat asked themselves, How does a recruit become a marine? 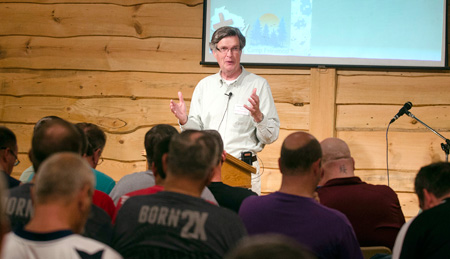 WESTFIELD, Wis.—How does a follower of Christ become a semper fi godly man? To answer that question, men at Camp Fairwood’s Laymen’s Retreat Sept. 6 and 7 asked themselves, How does a recruit become a marine?

John Greening, national representative of the GARBC and author of three men’s Bible studies published by Regular Baptist Press, was the keynote speaker, addressing the topic “Semper Fi Godliness.” God deserves semper fi men and is worthy of our faith and of His post as our commander, he said, speaking from Hebrews 10—12. Using as an example the Marine’s Crucible, a grueling 54 hours of basic training, Greening said God allows the tough times in life to build soldiers. When men see a brother who is having a tough time, they should not leave him behind; soldiers are responsible for watching out for each other. It’s the day-to-day faith that God rewards.

On this 45th year of the Laymen’s Retreat, 142 men attended. About 10 of those men have been attending for at least 20 years.

Tony Lash of Union Grove (Wis.) Baptist Church is chairman of the Layman’s Retreat Committee. He said there are three reasons to have a such a retreat—to get the laymen together for encouragement and fellowship, to hear a report about Camp Fairwood, and to support the camp financially. The Laymen’s Retreat was actually formed to help support Camp Fairwood, so each year the men contribute to a project. This year all offerings and money received through registration that exceeded operating expenses went toward the construction of a new craft building.

When the men weren’t learning from God’s Word, they took part in rifle and shotgun competitions and open-range shooting (men were encouraged to bring their own gear), disc golf, a softball game, archery, basketball, volleyball, and paintball. Golfers participated in a four-man scramble on Friday, and motorcycle enthusiasts went for a ride on Saturday morning. And throughout the week men strolled the grounds in front of the dining hall, observing the classic or customized cars that attendees displayed. Art Koehn of First Baptist Church, Necedah, brought his 1942 Plymouth Special Deluxe two-door. He has attended the retreat faithfully since 1987.

Camp Fairwood is one of several Regular Baptist Camps across the nation. Over the summer, the second-highest number of campers in the camp’s history attended, and 20 campers accepted Christ as their Savior.