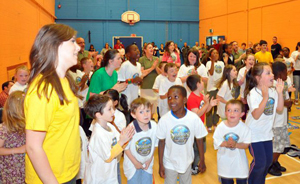 NAAS, Ireland—Every year Naas Baptist Fellowship holds evangelistic clubs for children at its church near Dublin. Missionary pastor Roger Parrow says, “When we started them back in 1998, there were several kinds of kids’ clubs.” So the church called theirs “Kids’ Klub”—the alliteration helps their club stand out. The Thursday night Kids’ Klub, held during the school year, averages 25 to 30 children. Then for the summer, or “holiday,” the church holds Kids’ Klub Kamp during the first full week in July.

Pastor Parrow was familiar with RBP’s VBS before he and his wife, Mary, went to Ireland 15 years ago. “In the early days,” he says, “we did all of our own work. That was fine when we had 20 or so coming.” But with 50 to 60 students, having a complete program really helps. “We love the skits,” says Pastor Parrow. “As pastor, I get to pick the roles, so I get to play the comic role. Everyone loved Dr. Skuba this year, and they all remember Doug A. Fossilup.”

Fun and games aside, Pastor Parrow likes RBP’s VBS programs because “they are solidly Bible based and well thought-out. A major determining factor is that we can get the whole package when we order from RBP. The themes are always exciting and easy to use. Our older kids who now work in Kamp often compete to try and remember all the themes since ’02.”

Ministering to kids in Ireland is different from ministering in the U.S. Pastor Parrow says, “Things are a lot different here. So far we have been able to adapt everything to make it work.”

While Kids’ Klub Kamp runs in the afternoons, in the evenings teens meet for Colour Clash. Pastor Parrow says, “We use RBP’s devotional guide for that. The average attendance is in the upper teens.”

Pastor Parrow’s summary of the Friday night closing service accentuates the Irish flavor of Naas Baptist Fellowship’s SeaQuest program: “On Friday night we have Kids’ Klub Kamp Klosing from 7:30–9:00, and Colour Clash also has a short presentation. We have a short programme highlighting each class, then a prize giving. Afterwards we have tea and biscuits (cookies) for the parents and family. We usually have over 100 total for this night.”