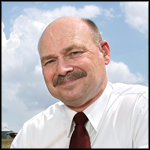 He devoted his life to church planting, saying, “It shouldn’t be thought of as a program. It is what you are—it is what God has called you to be.”

In a recent interview, Roger said that he started thinking about spiritual things soon after the movie The Exorcist was released. Roger described how he watched the movie and then visited a Baptist church, hearing a sermon “that scared me much more than the film did!”

“I was an art student who enjoyed drawing demonic characters,” Ridley said. “I sat on the edge of my seat during the sermon, riveted and frightened, so much so that I went home and tore up my demonic art without really knowing why.”

“I volunteered to help paint a mural of Jerusalem at a Christian coffee house in LaSalle, Ill., and they spent a whole week witnessing to me,” Ridley said of his classmates. “At the same time, someone stuck a gospel tract under my windshield, just a week before Christmas in 1974.”

After receiving Christ and joining First Baptist Church of LaSalle, Ill., Roger and Sheryl were married and left a day later for Baptist Bible College. Roger later transferred to Moody Bible Institute and graduated in 1982. While at Moody, Roger and Sheryl began serving at a rescue ministry with Mark Troupos, a missionary with Fellowship of Baptists for Home Missions.

The Ridleys then became church-planting missionaries with FBHM and moved to Grand Island, Neb., where they ministered for 12 years at Grace Baptist Church, planted by Pastor Greg Ubben. While in Grand Island, Roger began to read and collect a significant library of books. Sheryl began collecting guns and became a state trap shooting champion.

“We used to go hunting,” Roger would later laugh. “She would shoot the turkeys, and I would sit in the blind reading a book!”

In 1996 the Ridleys moved to Gretna, Neb., and began Gretna Baptist Church with a Bible study in their living room.

Roger became a board member of Baptist Church Planters, Elyria, Ohio, when the organization was founded in 1990. He was also on the boards of Whispering Cedars Baptist Camp and Gretna Community Living Center.

At the time of his death, Roger and Sheryl were surveying the Omaha area to identify the location of their next church plant. “I told my wife that we should consider planting one more church before we retire,” Roger said. “My wife corrected me and said, ‘I think we can do three.’ ”

But Roger Ridley also understood the danger of making too many plans. “We give so much credit to our strategy and plans,” Ridley concluded. “But it has nothing to do with us. God is doing His work as He sees best.”