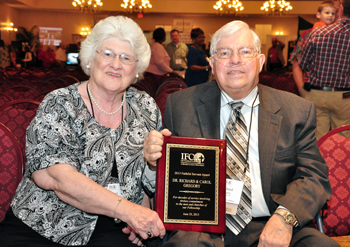 ORLANDO, Fla.—All eyes were on Dr. Richard and Carol Gregory as they stood to receive an award at this year’s IFCA International Convention. Although “standing, talking, and breathing deplete his oxygen,” says the Gregorys’ pastor, Nate Osborne, Dr. Gregory stood up. “The first thing he said was, ‘I want to bring praise to Jesus Christ because He’s my Savior and He’s the one Who really deserves this award.’ Then he turned to his wife, looked at her, and welled up, saying, ‘I also know that I could not have done the things I did throughout my life without this marvelous woman standing beside me.’ That is a fantastic testimony to the grace of God and true love. I was very moved by that,” says Pastor Osborne.

The Gregorys have been members of Faith Baptist Church, Winter Haven, Fla., since his ill health led them to their final retirement. One of their younger grandsons did not understand the “retirement” and move to Florida. Dr. Gregory assured him that they were not retiring but refocusing to serve the Lord in whatever capacity He provided. They have served at Faith Baptist in teaching and singing ministries and as role models. Pastor Osborne says the Gregorys have been “an outstanding Christian couple as an example to both young believers and older believers alike. They have demonstrated a faithfulness to God and His Word and to the Lord’s church for over 50 years in ministry.”

In recognition of their ministry, the Gregorys received the Faithful Service Award of the Independent Fundamental Churches of America. Dr. Gregory served as executive director of IFCA from 1987 to 2000 and as editor of The Voice until 2003. He also served on two mission boards, a seminary board, and several IFCA International boards. Carol served as the IFCA’s convention coordinator for many years; founded and produced Chera Fellowship, a magazine for those who have lost a loved one; ministered to widows; and visited Belarus and Russia, conducting women’s sessions to help women learn to minister to each other, especially to widows. Together Dr. and Mrs. Gregory traveled and ministered to hundreds of pastors and their wives.

Prior to that ministry, the Gregorys served in several churches, and after their retirement from the IFCA, they served in an interim capacity in four churches. Of their pastoral ministry Carol says, “We have loved our people, and they’ve loved us back. And we’ve enjoyed every minute of it. There was never any Monday-morning ‘I wish I could resign.’ That never happened. We’ve gone through some difficult times, but God was always so faithful.”

Dr. Gregory has written Ministry Matters: On Shepherding & Finishing Well, a warmhearted sharing of the insights he and Carol gained during their 57 years of ministry. In it he states, “All my life I have tried to teach people how to live, and now by God’s grace I want to show them how to die. The peace I possess has been an enigma to my doctors and Hospice nurse. They observe the reality that by God’s grace death holds no fears for me because ‘For me to live is Christ, and to die is gain.’ ” Pastor Osborne says, “In these waning years of his life, his attitude about his illness, his desire to continue to help and to serve has not waned a bit. I’m inspired by that kind of unique attitude and graciousness in his heart and life.”