I’m speaking of the Iowa State Fair and that other great carnival, the Republican Straw Poll, where I traveled with Baptist Bulletin photographer Darrell Goemaat to interview and photograph upcoming stories for the magazine.

On Friday we stopped at one of the most famous intersections in Iowa—one that is crossed by a million people, but only once a year. Stand long enough at the corner between the Varied Industry Building and the grandstand, and you’ll see your family, friends, and neighbors. Our photographer hasn’t lived in Iowa for fifteen years, but his head quickly turned to hear, “Hey, it’s Darrell Goemaat,” as he ran into a former college dorm mate.

This helps explain why a group of Des Moines–area churches spends time each year to staff a fair booth for the Iowa Association of Regular Baptist Churches.

As we stood to the side, one visitor wandered by and said, “Regular Baptists….I wonder why they’re called regular?”

This is just the sort of question the booth staff hopes to answer, a thousand times each day, as fair goers step into the air-conditioned building to cool off. We’ll post some photos from our trip on Friday, as well as a full story in an upcoming edition of the Bulletin.

Then it was on to Hilton Coliseum in Ames, where we worked on a story about Christians involved in presidential politics. We interviewed staffers and volunteers who are members of Iowa Regular Baptist churches and active in the campaigns of Gov. Mitt Romney, Gov. Mike Huckabee, and Rep. Duncan Hunter. 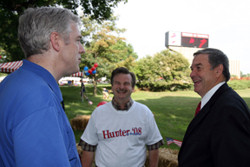 Here I interview Iowa campaign manager Patrick Anderson and Rep. Duncan Hunter. The mainstream media tends to discredit the Straw Poll (yes, it is zoo), but it is still one of the few places where folks can talk directly to the candidates.

One of the workers was Joe Earle, the faith-based outreach advisor for the Iowa Romney campaign. “I’ve done a lot of media interviews,” said Earle, “but this is the first time I’ve been interviewed by a Christian magazine interested in this part of the story.”

Though the media week was filled with background shots of cornfields and barns, there were subtle signs that not all candidates were True Iowans. Gov. Mitt Romney began his speech with a reference to “tall corn and green beans.” Sensing something was wrong as ten thousand heads snapped forward, he then added, “Soybeans, that is.”

This may also explain why several campaigns chose to dress their staff in solid navy blue despite the 95 degree temperature. That dark furnace of a shirt might have screamed, “Vote for President!” but the wet stains under the arms also said, “We’re not from around here.”

So was it accurate to describe both events as giant carnivals? Well, you decide. Both events had Ferris wheels, singing starlets, Elvis impersonators, live monkeys and alligators, raffle drawings, gigantic 150-pound watermelons…and the same whacko guy sweating inside a snowman suit. And both events were watched by media-types who generated endless commentary on Iowa’s barbequed pork and political pork.

More importantly for us, both events had Regular Baptists working behind the scenes. That’s our story; we’re sticking to it.

12 Weeks’ Worth of VBS One-Liners

Draw attention to VBS using one-liners. Try these or think of your own. ...more