Renew, Recharge, Remember Who You Are

DEARBORN, Mich.---Identity theft is a problem, even for teens who don’t have a credit card. Spiritually speaking, teens fight identity theft by understanding who they are, a recurring theme during Wednesday’s Students Alive! activities. 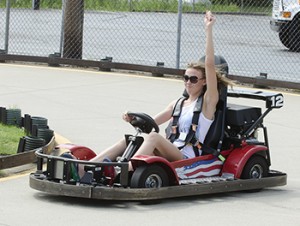 DEARBORN, Mich.—Identity theft is a problem, even for teens who don’t have a credit card. Spiritually speaking, teens fight identity theft by understanding who they are, a recurring theme during Wednesday’s Students Alive! activities.

Pastor Mark Shaw, Calvary Baptist Church, Greenville, Mich., spoke from 1 Corinthians 1 about the importance of knowing your identity. He told the teens that though they are human and sinful, God still extravagantly loves them and tremendously values them. Those are the facts; don’t forget them, Shaw says.

Then the conversation took a practical turn, hitting pretty close to home—knowing who you are in social media. Lance and Carrie Augsburger led two discussion groups, exploring the positives and negatives of using social media, helping students think about using the Internet to glorify God.

“How does what you post direct other people to faith?” Carrie says. “Is it causing them to think great thoughts about our great God?”

The students were following; they know exactly what the issue is.

“It was a good reminder,” says Rebekah Javaux, from Calvary Baptist Church, Quincy Ill. “You can never be too careful on the Internet.”

The rest of the identity-building was even more hands-on, albeit a bit less structured, as the group spent the afternoon and evening at Midway Sports and Entertainment in Taylor, Mich. Activities including go-karts, bumper cars, batting cages, mini golf, a driving range, and even a EuroBungy dome kept the students going. Oh, and the pizza and pop didn’t hurt either.

“Taste and see that the Lord is good,” Jon says. “He is your shield, and He will equip you for whatever’s next.”

For teens at Students Alive!, recharging your faith means remembering who you are and whose you are.