Refusing the Wrong, Choosing the Right 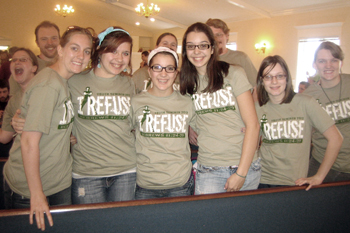 ENDICOTT, N.Y.—“I refuse” is not always a statement about rebellion and belligerence, but can be one about character and commitment, about refusing to do the wrong things and choosing to do the right things. Fourteen hundred teens from churches affiliated with the Empire State Fellowship of Regular Baptist Churches learned this very principle as they gathered for an annual teen Bible conference at four locations in New York (Marilla, Horseheads, Norwich, and Poughkeepsie) March 23 and 24. Four gifted youth speakers, Sean MacPherson, Pat Odle, <a title="View RBP books by Mel Walker" Mel Walker, and Don Fenner, addressed their respective seminars from Hebrews 11:24–27 on the theme “I Refuse.”

Moses, teens learned, set the standard, as he “refused to be called the son of Pharaoh’s daughter, choosing rather to suffer affliction with the people of God than to enjoy the passing pleasures of sin” (Hebrews 11:24, 25).

Scripture challenged teens to make a variety of decisions, and in breakout sessions, they had the opportunity to discuss those topics, such as refusing “Shallow Relationships,” “Empty Convictions,” “Fake ID,” “To Be Weak,” and “To Put Anyone Before God.” In a three-part series, 11th and 12th graders looked at the topic “I Refuse to Walk Away after High School,” dealing with the problem of huge numbers of teenagers rejecting their faith after graduating high school.

To help them remember to take a defiant stand against wrong living and ungodly behavior, each person received a cactus-color, ring-spun T-shirt with the imprint “I Refuse.”

The seminar wasn’t all work and no play though. Loads of crazy games, high-energy music, and plenty of goodies that teens enjoy (like pizza, soda, subs, and sweets) filled the two days. With summer-like weather, it “was an awesome weekend,” says Craig Golden, state representative of the Empire State Fellowship, “with a heavenly blend of preaching, teaching, singing, eating, laughing, and refusing and choosing resulting in changing.”

This will be the last youth seminar for Golden, who at age 71 will retire on April 17. “Praise the Lord for His Word, these seminars, and for teenagers who listen, learn, and live for Christ,” he says. “What a thrill it is to see churches full, many times overflowing and jam-packed, with enthusiastic teenagers, excited and eager to be followers of Christ. It makes the effort of working with teens and any frustrations that might be involved worth it all.”