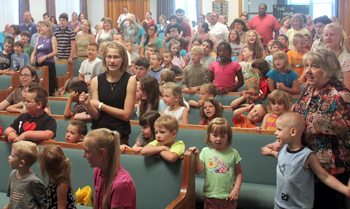 “VBS is a big deal,” says Pastor Alexander, member of the GARBC Council of Eighteen, who received a pie to the face as part of an attendance incentive. “We have kids come who normally wouldn’t be here.”

Using RBP’s BugZone, the church held a weeklong Vacation Bible School that had the highest VBS attendance in 15 years. Basing the overall goal on the first day’s attendance, Associate Pastor Jeremy Peck agreed to “get pied” if 130 people (including students and workers) attended. When that goal was met on Wednesday, the pie was served, and the church set a new goal of 150 people in attendance. On Friday, the church welcomed over 200 people, including many parents who had been invited to join their children at a picnic following the closing program, and the students were thrilled to see Pastor Alexander get a pie in his face.

“The picnic went very well. People really seemed to appreciate it, and it gave us an opportunity to meet all these people, which really expanded our contact.”

But attendance wasn’t the only thing to break records. The church used RBP’s suggested missions project, showing the Operation India video on Monday and collecting an offering each day that would provide curriculum and training to reach children all over India with the gospel. At the closing program, the church showed the video again so the many parents in attendance could see the purpose of the offering.

“We don’t ever want people to think VBS is about getting their money. We explain that very carefully to the parents, and I think the video had a big part in their realizing the significance of what the money is going for.”

When volunteers counted the money, they realized that the final offering had been over $500, bringing the week’s total to nearly $850. After dismissing everyone to the picnic, Pastor Alexander was stopped by a grandmother who said she had made a profession at a Baptist VBS when she was young. Saying that an even $1,000 would make a better offering, the woman wrote a check for the difference.

“The offering is not our goal,” Pastor Alexander reminds. “Evangelism is the purpose. All the other stuff—that’s wonderful—but evangelism, that’s the purpose.”

During the week, 11 children made decisions for Christ, including five professions of faith.

“We consistently use RBP. I don’t even look at anything else. I can trust it doctrinally. It’s solid evangelistically, and it’s fun.”

Are your Bible studies full of fresh concentrated truth? Three reasons why they should ...more

Perspective: Finding Contentment in an Age of Cynicism and Comparison

When people search for a congregation, can they find ...more