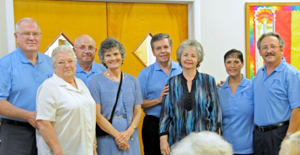 PUNTA GORDA, Fla.—Peace River Baptist Church enjoyed two days of remembering “30 Years of Grace and Glory” as it celebrated its anniversary. Former pastors James Henning, Cliff Owens, and Tom Hughes challenged the church to have a ministry founded on God’s grace, focused on God’s glory, and fueled by God’s power.

Peace River Baptist was planted in 1981 by missionary James Henning of Continental Baptist Missions. He and 22 charter members met in a Punta Gorda high school cafeteria. That first summer, Pastor Henning and his family were the only ones left after the snowbirds went north.

By September 1984 the congregation was occupying their first building. The church has undergone many building projects since then, with the latest completed in the summer of 2010, when the church added a commercial-grade kitchen and a parking lot.

On Saturday night the church family met for a delicious meal prepared in the new kitchen and served by the church’s teens. Following the meal, guests gathered for a service to hear former pastors share testimonies of their ministries at Peace River Baptist.

Sunday services featured special music by a men’s trio and the 45-voice church choir, plus a mini piano concert by Minister of Music Jim Reuter. The group enjoyed what Pastor Jim Stultz called “a wonderful carry-in dinner” on Sunday, followed by an afternoon service.

Pastor Stultz says he and the congregation are “grateful for the hard work of those early pioneers. We pray that we will continue to be a church founded on God’s grace, focused on God’s glory, and fueled by God’s power.”