Pastors ‘Draw Near’ at Prayer Summit 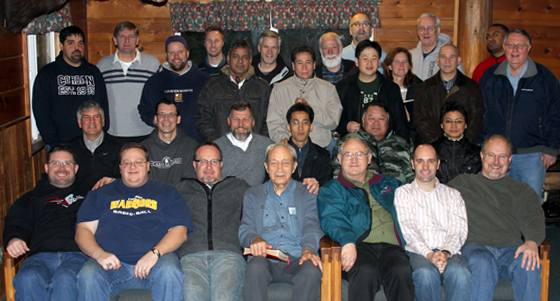 CARNATION, Wash.—Baptist Network Northwest held its third annual Pastors Prayer Summit at Camp Gilead, located in the Cascade Mountains east of Seattle, Jan. 23–25. “Draw Near” was the theme, as seven pastors led seven extended sessions of prayer and praise among the group of pastors from Washington, Oregon, and Idaho.

Focusing on expository prayer, the men used a passage of Scripture to guide them through two-hour prayer sessions by praying through the themes raised in the passage. Each session also included spontaneous worship and singing facilitated by two pastors who played guitar.

Tim Baker, pastor of Bethany Baptist Church, Salem, Ore., and Prayer Summit director, explains the reason for organizing the event: The Bible urges us to pray, he says. “As spiritual leaders, we know this is true. Yet the unfortunate reality is that most of us don’t give prayer the priority it deserves. Sometimes, we don’t pray much at all.” So for three days the pastors gave themselves fully to prayer. “No program. No speaker. No agenda.” Just praying together and worshiping God, trusting Him to speak and give direction.

Throughout summit the pastors made sure to pray for one another. “As needs are shared, we gather around our brother, lay our hands on him, and lift his needs before the Father together,” Baker says.

Tuesday afternoon included a rest break, which allowed time for a walk or a nap or take part in an Xbox Kinect tournament.

Pastor Baker says the Prayer Summit “was one of the most unifying experiences I have been part of in my years in our fellowship.”