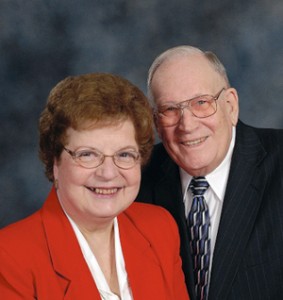 PANA, Ill.—First Baptist Church elevated Pastor John Hippard to the position of pastor emeritus in a special service. John Greening, GARBC national representative, was the keynote speaker. Many relatives and friends attended, including the woman who ministered to Pastor Hippard when he made a public declaration of his salvation in 1954.

Individuals read letters from former churches he pastored and from people whose lives were touched by his ministry. Pastor Hippard and Pauline’s favorite hymns were sung, and a men’s quartet ministered in music. Pauline Hippard was commended for her faithfulness as a pastor’s wife and was presented with a dozen roses. Pastor Hippard received a framed certificate of merit, and the couple received a scrapbook containing many photos, letters, and cards.

Pastor John Hippard trusted  Christ as his Savior on Christmas 1953 at the age of 25 and was baptized a few months later. He married Mildred Lamprecht on Oct. 8, 1955. God called them into the ministry on July 15, 1956. He was licensed to preach by First Baptist Church, Hammond, Ind., on May 15, 1957 and was ordained by First Baptist Church, Lowell, Ind., December 13, 1963. Pastor Hippard and Millie had been married almost 48 years before her death in 2002. They were blessed with four children. Pastor Hippard and Pauline were married on Feb. 21, 2004. Pauline has five children.

Prior to being called into the ministry, Pastor Hippard served in the United Sates Navy as a Corpsman, and then served three and a half years as a field representative for the Chicago Chapter of the American Red Cross. He attended Illinois State University and graduated from Chicago College of Medical Technology as well as Northern Baptist Seminary. His 54-year ministry includes pastoral positions in two churches in Indiana and one church in Nebraska. He also ministered in two Illinois churches—First Baptist Church in Shelbyville, where he had a live radio broadcast for 17 years, and First Baptist Church in Pana, where he has faithfully served for 15 years as visitation pastor.