SAND LAKE, Mich.---Shortly after accepting the call to become the pastor of Ensley Baptist Church in the fall of 2012, Timothy Decker began the application process to serve as a chaplain. 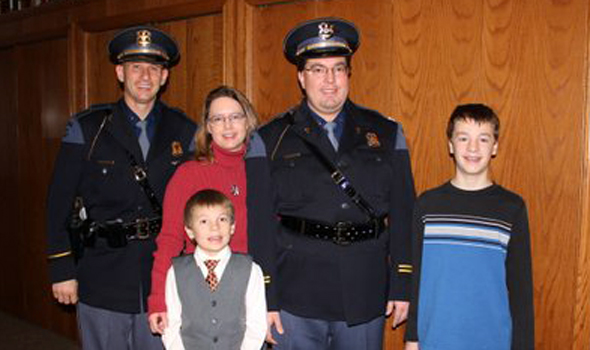 SAND LAKE, Mich.—Shortly after accepting the call to become the pastor of Ensley Baptist Church in the fall of 2012, Timothy Decker began the application process to serve as a chaplain with the Michigan State Police and to be endorsed by the Regular Baptist Chaplaincy Ministries. The MSP Chaplaincy Executive Committee began processing his application in October 2012, which included an extensive background investigation. Michigan State Police chaplains are as carefully checked as their troopers, and Pastor Decker’s application was stalled somewhat because new trooper applications take priority. In July the trooper working on Decker’s background investigation was finally able to do a home visit and actively contacted references throughout the summer.

In October 2013 Decker learned that most of his intensive background check had been completed, and he was invited to the semiannual Michigan State Police Chaplains Training on Oct. 7 and 8. A final interview took place at that time. “It’s been a very long process to become a chaplain,” he reports, “but things are looking up!”

On Oct. 11, 2013, Pastor Decker was approved to begin his ministry as an MSP chaplain. He was introduced to the troopers at the post meeting on Oct. 16, and commenced taking ride-alongs and building relationships with the troops. His uniform fitting and equipment issue was also a highlight, he says.

In January 2014, Post Commander Lt. Sweeney visited Ensley Baptist Church to thank the congregation for allowing their pastor to serve the state police as a chaplain. Decker was sworn in and officially appointed as a chaplain on Feb. 26 at the MSP headquarters in Lansing, Mich. Col. Kriste Kibbey Etue, Michigan State Police director, officiated his oath of office.

Pastor Decker sees serving as a chaplain as a great opportunity to minister to a broader group of people, including both MSP staff and the public at large. He feels that it enriches him as a pastor and as a person, saying, “You see a different side of the world than you see from your study. It’s also a great way to serve those who put their lives on the line every day serving our communities.” He is thankful that his congregation sees the chaplaincy as an extension of his and their ministry.