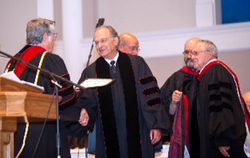 REDDING, Calif.—Prior to addressing the graduates at the 37th Annual Commencement Exercises of Shasta Bible College and Graduate School May 11, I awarded Pastor Al Franklin the honorary Doctor of Divinity degree. Al’s talented wife, Patricia, received an honorary BA degree in recognition of her 45 years of Christian service as a pastor’s wife, author of children’s books, and godly mother and grandmother.

To many who know Pastor Franklin and have been blessed by his ministry, he is regarded as one of fundamental Christianity’s premier Bible expositors. His diligent research, skillful use of the original Biblical languages, and relentless commitment to “accurately handling the Word of Truth” are evident in his pulpit, classroom, and radio ministries over KVIP, KGRV, and KIBC.

He is also respected by scientists and laypeople alike in his unique avocation as a paleontologist. Through sheer common-sense observation, he has crafted a practical defense of the Biblical account of creation, based on irrefutable scientific evidence found in fossils he has examined and unearthed in California’s Shasta, Kern, and San Luis Obispo counties; Arizona; Wyoming; Montana; and South Dakota. His unusual ability to (with fossils in hand) demonstrate the absolute impossibility of evolution and the reality of the worldwide flood recorded in Genesis 7  and 8 from the abundance of fossil evidence has confounded and baffled secular evolutionists, many of whom admit they can offer no reasonable explanation for the evidence he presents.

In August of the same year, he and his college sweetheart, Pat Eastman, were married. Thus began not only an enduring love relationship, but a dynamic ministry team of message and music that has spanned the past 48 years.

For 25 of the past 38 years he has taught freshman Bible and senior Bible at Liberty Christian High School as well as Bible exposition and homiletics at Shasta Bible College and Graduate School and Cornerstone Bible Institute in South Dakota. He has also traveled widely in Israel during his four visits and has frequently spoken at Bible conferences and Christian outreach events for hunters and outdoorsmen.

We are grateful for Pastor Franklin’s faithfulness to Christ and God’s infallible, inerrant Word. We rejoice over his impact and influence here in Northern California and especially on the multitudes of young people who have been inspired and challenged by Al and Pat’s consistent example of excellence in so many areas of Christian life and ministry.