CHESTER COUNTY, Pa.---When Dave Stallard graduated from Baptist Bible College in 2007, he could have chosen to play professional basketball in Europe. Instead he took a position at Camp Sankanac in Chester County, Pa. 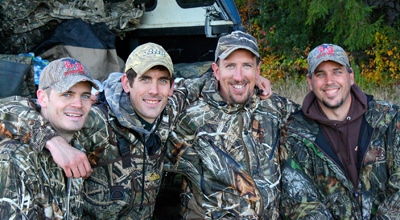 Phil, Dave, Curtis, and Jeff of The Call Outdoors.

CHESTER COUNTY, Pa.—When Dave Stallard graduated from Baptist Bible College in 2007, he could have chosen to play professional basketball in Europe. Instead he took a position at Camp Sankanac in Chester County, Pa. There he uses his knowledge and passion for hunting to reach hunters and kids through a hunting ministry he cofounded called The Call Outdoors.

The Call Outdoors team holds annual events at Camp Sankanac and travels all over the U.S. and Canada giving waterfowl, turkey, and dog-training seminars. “TCO allows me to bring my passion for witnessing to the lost with my passion for hunting,” Dave says.

For Dave’s wife, Brielle, her husband’s acceptance of the position at Camp Sankanac meant returning to the place where she was raised. Her dad, Jan Coudriet, was camp director for 29 years until the Lord called him Home on May 23, 2012. Her mom, Beth, is a full-time missionary with Bible Centered Ministries International (the camp’s mission agency) and is head of the camp’s nursing program. Brielle is now the office manager, handling the accounting, payroll, summer registration, and other responsibilities that make Camp Sankanac run smoothly.

Joining Dave in The Call Outdoors are Curtis Kenyon, Jeff Murphy, and Phil Stallard, Dave’s younger brother. Dave and Phil are the sons of Mike Stallard, dean of Baptist Bible Seminary. Kenyon is the youth pastor at West Windsor Baptist Church, Windsor, N.Y., and was Dave’s youth pastor. The four men say on their ministry’s Facebook page, “In the last 5 years we have been blessed to present the Gospel to over 6,000 people so far and have seen the Lord bring over 250 people to Himself!”

Men are the target audience for TCO. As the team says, “It has been observed that if the man of the house starts going to church, 90% of the time the rest of the family will follow. This is the purpose of our ministry . . . to reach men for Christ and in doing so, reach families for Christ!”

Outreach events aren’t the team’s only ministry tools. They have been collecting footage from hunting trips to create evangelistic hunting DVDs. Dave says, “So far we have raised enough money to hand out around 400 DVDs. That’s 400 DVDs with the gospel! Our goal is to get to 1,000 a year.”

On Feb. 23 TCO took its goose hunting presentation to Calvary Baptist Church, Pulaski, N.Y., for the church’s Annual Sportsmen’s Banquet and Program. “What a fantastic evening!” the church says.

Curtis and Phil brought along pro staffers Clay Herb and Alex Roupe. “The duck and goose calls they had hanging around their necks were not just for show!” says church secretary Jan Kirby. “The room seemed to be alive with geese and ducks as they demonstrated various call techniques and introduced us to the different calls used to bring the waterfowl in to you during your hunt.”

Attendees watched a video of several of the TCO’s hunts, and met a golden retriever named Gabby, who demonstrated her retrieving skills. Tips on goose hunting and waterfowl filled the evening. But the highlight came when Curtis presented a talk on “Satan’s Decoys.” He transitioned from talking about decoys that attract waterfowl to the decoys that Satan uses to attract unsuspecting people, after which he clearly shared the plan of salvation.

When the event was over, decision cards that everyone had filled out indicated that seven people made decisions for Christ.

Calvary Baptist says, “Praise the Lord for the salvation of each of those individuals and for the dedication of the godly men representing The Call Outdoors.”