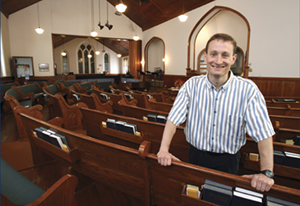 Montrose is a small town where everybody knows everyone else,” Bob Kadlecik says as he rattles off some statistics about the northeastern Pennsylvania borough.

Bob knows his numbers. He describes 17 percent of the population as mainline Protestant and another 12 percent as Roman Catholic. “But only four percent attend any sort of evangelical church,” Bob says, noting that Susquehanna County has 20 Baptist churches, not all of which are healthy. “We have some little churches, and then your little-little-little churches,” Bob tells us, explaining that many of the Baptist churches have only 15 or 20 members.

Over the years, Montrose has had plenty of religious influence. Reuban Archer Torrey owned a home here in the early 1900s, where he edited a series of influential pamphlets known as The Fundamentals. Torrey also founded the venerable Montrose Bible Conference here, which just celebrated its 100th year. Singspiration Music published thousands of hymnals and choir cantatas from this location until it moved to Grand Rapids in 1963. And the Latter-day Saints believe Joseph Smith was baptized in the Susquehanna River that runs through town.

Montrose is religious enough to have a Church Street, location of the classic brick building where Bridgewater Baptist Church has been meeting since 1899. The church itself is much older, having celebrated its 200th anniversary in 2008. The church grew quickly after the Great Revival of 1810, when 52 people were baptized. “People were coming to Christ like clouds and like doves to their windows,” church records say.

Now in an era when the town’s population and religious roots are waning, the church has a surprisingly healthy Sunday morning attendance of 350, led by a young, engaging pastor who asks everyone to call him Pastor Bob. (“My own relatives can’t agree on how to pronounce my last name, so I couldn’t expect the congregation to say it!”)

Bob and Becky Kadlecik have three children: Carys, Amber, and Ryan. The family came to Bridgewater Baptist in 2005, and the church has doubled in size since they arrived. The church is growing so quickly that the landmark building is showing its age and limitations. The church holds three services to accommodate everyone in the 200 seat auditorium.

It is an interesting building, but Bob would rather talk about the people, describing the congregation as “an embarrassment of riches, full of wonderful leaders.” He has developed the church leadership through a small-group ministry, which Bob calls the key to their growth. “People will come a few weeks, but if they don’t have a relationship with you, they won’t stay.”

This zeal for discipleship led Bob to test, and abandon, ideas that other churches have frequently used.

“I don’t believe in outreach events. I don’t think they are effective at keeping people in the church,” Bob says, explaining why his church no longer does Christmas cantatas. This is a significant change; John W. Peterson was formerly a member of the church and wrote his first cantatas here. Older members remember the musicals at the high school, where the entire town would show up for a premiere, but those days are long gone.

Bob offers a few of his own ineffective ideas. “We showed Spiderman 3 in a movie theater-after it was over, I talked about its spiritual themes. I thought it would work.” Bob also became disillusioned with their Superbowl parties. “None of the beer drinkers wanted to come,” he says.

Bob also regrets that the church formerly had a reputation for being so separate that they were unwelcoming to their community. The church has worked hard to overcome this reputation by planning (ironically) an annual community event-one that skipped the beer but served up ample portions of soda, barbecue chicken, and corn on the cob. The church calls the event Worship on the Green. Last summer, Bob preached on forgiveness from Luke 7:36-50, and 640 people attended.

“I’m surprised how people in Montrose have returned to our church. We’ve been baptizing a lot of mainline denominational people who were saved in our AWANA and VBS programs as kids.” Returning to church as adults, these visitors end up joining a small group, attending Bible studies, and connecting with the people Bob calls “quiet heroes-the men and women whose silent sacrifices shout the love and truth of Christ more than a million sermons.”

“I thought people would come, join the church, and then begin serving and giving to the offering. Instead, we’ve found that people come, start serving, start giving financially . . . and then finally join the church.” The church sees about a year’s delay between the increase in attendance and the increase in giving. Then, another year later, the membership starts to increase. “Membership is very scary to people today, Bob says, “It takes people a long time to join a church.”

When the cornerstone to Bridgewater Baptist Church was laid in 1899, the town of Montrose was in the process of rebuilding. A fire had started in a nearby toy factory; 27 wood-frame buildings were destroyed. Though the fire did not quite reach the existing timber building where Bridgewater Baptist met, it came close enough to ignite worries that the existing building was unsafe. The new building was completed at a cost of $7,500.

“The church stands today a monument to God’s goodness pointing weary, foot sore travelers to the road which leads to life eternal,” reported the local newspaper at the time.

It was this concern for “weary, foot sore travelers” that provoked the church to address long-range plans during a three-month study in 2008. At the end of the process, the church voted to search for land to build a larger facility. It was a difficult decision. The landmark 1899 building, one of the oldest in the GARBC, has limited parking, difficult steps for older church members to navigate, and a maze of hallways that can sometimes confuse visitors. In places, the grand old building was showing its age. The cost of mechanical upgrades to heating, cooling, and utilities would be significant.

“We are living off the faith and sacrifice of Christians of the Civil War generation and others who built our present sanctuary in 1899,” Pastor Bob challenged the church during the decision process. “A church building can be a gift of one generation to many that are to come.”

When the congregation voted to look for land, it was approved by a 90 percent majority. Then a church member passed away just one week short of her 100th birthday, and the congregation met again to consider purchasing 40 acres.

“We only had one opposing vote, a vote of 98 percent,” Bob says. “I teased the congregation that I didn’t get that high when they voted to call me as pastor!”

Darrell Goemaat is director of photography for the Baptist Bulletin. Kevin Mungons is managing editor.