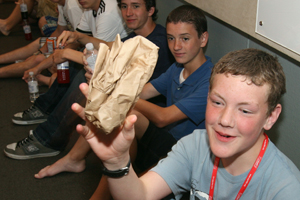 SCHAUMBURG, Ill.—“The easiest way out of Chicago traffic is the rapture.”

The list of Millennium Park attractions included the Pritzker Pavilion, the BP Bridge, and Cloud Gate, known locally as the Bean. Also on the list was the Crown Fountain, twin 50-foot fountains that display faces and spout water from the faces’ lips. Ryan Schick of Washington, Mich., earned his team extra points by allowing a face to “spit” on him.

With storms moving in quickly, the teens returned to the Chicago Cultural Center and played games inside until storm sirens forced them to move into an interior hallway. “We got half the scavenger hunt in,” says Lance Augsburger, “and the second half was canceled by the tornado watch.”

When the teens returned to their room, they transitioned into the service by singing “How Great Thou Art,” the phrase “I hear the rolling thunder” becoming quite literal. But even through the storms, the teens recognized God’s complete control over the situation. Speaker Dan Dark preached from 1 Peter 3, reminding the teens to “put God in the right place,” resulting in their not fearing, being ready with an answer, and submitting to God.

So, although the evening didn’t go as originally planned, the teens still had a blast.

“We make our plans, we have our ideas of what’s going to happen, and then a tornado comes through Chicago.” Although there are no confirmed tornado touchdowns, Lance’s point is clear.

“This is what happens when you have a conference called ‘Our God Reigns.’ ”