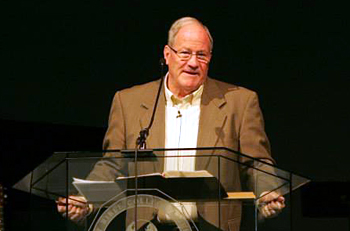 Schloegel, who was the featured speaker at chapel, was also awarded the honorary rank of professor emeritus. The peer-motivated distinction is for those who have made an extraordinary contribution to education in general and BBC&S in particular.

“It was good visiting with old friends and having the opportunity to address the students in chapel,” said Schloegel, who taught for 35 years at BBC&S until his retirement this summer. “My wife, Chris, and I both really enjoyed the day.”

The day was meaningful to former students and colleagues as well.

“I know Joe Schloegel as professor, peer, mentor, and friend,” said Associate Professor Dr. Bill Higley. “He has touched my life in so many ways. I have grown not only because of what I learned from him in the classroom but also what I learned from him in conversations about students, teaching, theology, family, and life. He has been a godly mentor to me in every possible way one could be.”

“It was awesome to see him back,” he said. “I loved having him as a professor. God used him to teach me so many things. Having him back today was so encouraging. It makes me realize how much I miss him.”

Gray “Iron Joe” T-shirts were scattered through the audience, worn by students as well as faculty and staff members. Professor Janet Hicks wore hers thrown over her shoulder like a scarf.

His chapel message was about assurance of salvation. It was in the standard Schloegel style—no nonsense, very direct, and easy to follow and absorb.

After he spoke, BBC&S President Jim Jeffery and Vice President and Provost Dr. Jim Lytle emerged from backstage wearing “Iron Joe” shirts. They brought Joe and Chris to the stage to tell him about his new emeritus status.

“He had the gift of pushing students beyond their self-imposed limitations,” Dr. Lytle said. “He really believed that they could understand the Scripture and read difficult books. Students loved him because he made them think. And they loved him because they knew he cared about them.

“One of the greatest gifts he gave our students was in the way he taught theology. He started with the Bible, and if elements of a theological system didn’t fit the Bible, he tossed those elements. That was not always a popular approach, but he is so committed to the Word that he took the heat.”

Schloegel’s special day also included the opportunity to attend a lunch with friends and participate in receptions with employees and students who respect him greatly.

“As a college freshman, my theology classes at BBC exposed the weaknesses in my hermeneutic,” said Associate Professor Lynelle Buchanan. “The tearing down of my incorrect assumptions and beliefs led me to the place where I could rebuild a strong, truly Biblical theological foundation that has kept my faith firm in the most challenging times of life. I owe Joe Schloegel a great debt of gratitude for his role.

“Our Counseling program is specifically designed to ensure students take key theology classes in formative periods of their counseling education. Knowing that a student had been challenged by Joe gave a predictability to what my students would be prepared to discuss.”

The influence of Joe Schloegel through his teaching, mentoring, and pastoring was profound.

“Mr. Schloegel helped students study theology with an emphasis on logic and reason rather than emotion or tradition,” said Josh Waldron, a 2006 graduate who is now a high school teacher and entrepreneur in Waynesboro, Va. “Though his outward demeanor earned him the nickname ‘Iron Joe,’ he cared deeply for his students and often brought his great sense of humor into the classroom.

“As the pastor of Berean Baptist Fellowship [Nicholson, Pa.], he created an atmosphere where dialogue was encouraged. Never content with a passive congregation, he encouraged members to ask questions and brought a classroom atmosphere to each gathering. Having served as a deacon in this environment, I was particularly impressed with his desire to walk with integrity, minister to the community, and go above and beyond in caring for the members of the church.”

Prior to his service at BBC&S, Schloegel served in pastoral roles at Bethel Chapel in Huntingdon Valley, Pa., and Burr Oak Baptist in Albion, Ind. He served locally at Berean until his retirement. He loved the local church and served several others as interim pastor. He earned his bachelor’s degree from then-Philadelphia College of Bible and MDiv and ThM degrees from Grace Theological Seminary.

The nickname “Iron Joe” originated with Dr. Lytle, who thought of it in chapel one day in the early 1980s.

“I was talking about dealing with fear,” he said. “I told the students they shouldn’t be afraid of Mr. Schloegel. I remember his line, ‘If you’re not sucking your thumb by the end of class, I’ve failed you.’ I said then that his perspective on the truth was as unyielding as iron and that the students needed to imitate that. The ‘Iron Joe’ stuck.”

And his lessons continue to resonate.

“He always made us prove what we believe for ourselves, and it was always challenging,” said Renee Thompson, a senior Counseling major from Durban, South Africa. “It was good hearing him speak again today, but kind of sad knowing he won’t be here anymore.”