AUSTIN, Minn.—First Baptist Church celebrated another of its bilingual Communion services on Nov. 6. 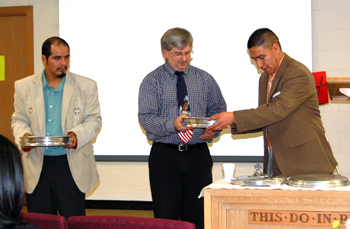 AUSTIN, Minn.—First Baptist Church celebrated another of its bilingual Communion services on Nov. 6. Pastor Moises Rodriguez led the service in Spanish. It was interpreted into English, and both English- and Spanish-speaking deacons assisted Pastor Rodriguez.

Pastor David Johnson says, “The overall goal of the church is to be one church body consisting of many ethnic groups from the community. FBC became a multiethnic church when it started reaching out to the growing Hispanic community in Austin.” The church’s leaders and workers reflect this goal: deacons and trustees, Sunday School teachers, and nursery workers represent several ethnic groups.

Each Sunday morning the children and teens meet in Sunday School classes using English, but the church provides separate classes in English and Spanish for adults. During the morning worship hour, services in English and Spanish are held simultaneously. Pastor Johnson leads the English service, with Pastor Rodriguez leading the Spanish service. People from Vietnam, Sudan, and Kenya attend the English service, leading at times to four languages being spoken at once.

“The bimonthly, bilingual Communion service helps tie the congregation into one body,” says Pastor Johnson. Other English services are held on Sunday and Wednesday nights; and Spanish meetings are held on Tuesday, Thursday, and Friday nights. The church is working on expanding its Spanish Bible studies into Albert Lea, Minn., 20 miles away. All baptismal services, business meetings, and officers’ meeting are held with an interpreter.

Next post Arizona Men Ask, ‘Am I Man Enough?’