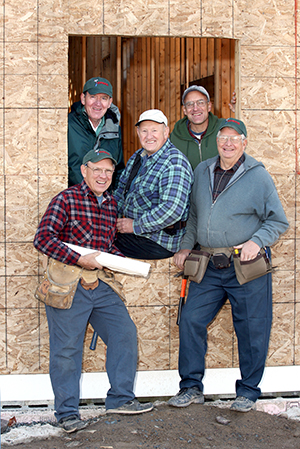 Two mission agencies with GARBC ties have announced a merger, with Baptist Missionary Builders of Lancaster, Ohio, joining Baptist Church Planters of Elyria, Ohio. Both groups have roots in the Fellowship of Baptists for Home Missions, which merged in 1982 with Galilean Baptist Mission to form Baptist Mission of North America.

If all of this sounds like an alphabet soup of church-planting acronyms, it is helpful to remember that the various agencies, taken together, have been responsible for planting more than 600 GARBC churches!

“A merger of two mission agencies is something that only God can orchestrate,” says David Whipple, executive director of ChurchCare for Baptist Church Planters. “The possibility for misunderstanding among leaders is great. Godly men have to guard their hearts against pride. All involved have to set aside their preferences and agendas.”

Saying he was “grateful for the clear direction God has led in the combining of these two great mission agencies,” BMB board member Richard Parelli noted that both boards approved the proposal unanimously.

Parelli says that as the leadership of Baptist Missionary Builders aged, and as their missionary builders began to retire, the board was concerned that the mission would be unable to continue the building projects that had saved churches thousands of dollars over more than 20 years of ministry.

“With this merger, the godly leadership and many resources of BCP give assurance that the construction benefits experienced by churches over the years will continue,” Parelli says.

“Baptist Church Planters has always considered Baptist Missionary Builders as a partner in ministry,” adds David Whipple, who says the two agencies began exploring a merger in 2008. After much prayer and discussion between the two groups, representatives met on May 3, 2010, to approve the basic framework for a merger. After several more discussions, a final proposal was drafted, with both boards approving the details in September.

Whipple says that all of the current BMB missionaries will be approved as BCP missionaries and then assigned as missionary builders with ChurchCare, a subsidiary corporation formed by Baptist Church Planters in 2004. The ChurchCare division uses a revolving fund to provide short-term loans and grants to church plants for facility purchase or renovation. By creating a subsidiary corporation, Baptist Church Planters protects itself from the significant liability of maintaining a loan fund.

Howard Fraser, a recently retired engineer from Carrier Corp., will become the director of building ministries for ChurchCare. He will be assisted by Martin Eaton, the former director of Baptist Missionary Builders. Eaton will continue as a consultant for the next several years and continue his building ministry. Four of the BMB board members have been added to the ChurchCare board: Charles Pausley, Richard Parelli, Tim Hitchcock, and Dan Parker.

“It is now official,” says Chuck Pausley, who formerly served on the boards of FBHM and BMNA. “The long lost brothers of the former Baptist Mission of North America family have come back together after nearly 20 years of separation—a heartwarming story!”