WINNEBAGO, Minn.---Minnesota Regular Baptist Camp at Bass Lake marked its 50th anniversary with a Jubilee Celebration to remember God’s blessings of the past and look forward to His leading in the future. 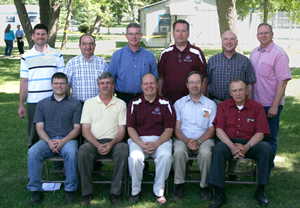 WINNEBAGO, Minn.—Minnesota Regular Baptist Camp at Bass Lake marked its 50th anniversary with a Jubilee Celebration to remember God’s blessings of the past and look forward to His leading in the future. Special guests for the day—joining the 281 attendees—were John Greening, GARBC national representative, and his wife, Daria. Koleesa Amundson, a harpist from New Prague, Minn., as well as a musical team from Maranatha Baptist Bible College, ministered in music. Guests viewed a pictorial history of the camp and heard former camp director Paul Lobb (1985–2000) share insights from his years of leadership at the camp.

This year the camp built a new dining hall and kitchen. The building will be insured for nearly $1 million but was built at a cost of only $460,000 through many donations and the sweat equity of friends. Camp officials recognized contractors and other workers for their service before cutting the ribbon and dedicating the building to the Lord.

Following a catered meal in the new dining hall, John Greening shared the priority and importance of camping ministries today. Current camp director Darrell Friar concluded the day’s activities by presenting the booklet A Jubilee Dream, which relates modernization and expansion plans for the future.

Minnesota Regular Baptist Camp began under the vision and direction of several Regular Baptist churches in Minnesota. The 27-acre property was purchased in the fall of 1959 for $20,400. After initiating a fund-raising campaign with the slogan, “If you put your heart into camp, camp will be in your heart,” individuals moved quickly to pay for the property, primarily through the sale of camp debentures. The $29,480 that people raised exceeded the amount needed to pay off the indebtedness. Individuals and small groups then worked to clean up the site, turning the old dance hall and grounds into a chapel and friendly campground. Six months later Minnesota Regular Baptist Camp held its first camp, a Junior Boys Camp (followed by Junior Girls the next week).

Several men have served as director of Minnesota Regular Baptist Camp in its 50-year history: Lynn Pace (1959–1961), Frank Peterson (1961–1967), Charles Pausley (1967–1968), and Austin Plew (1968–1970). All of these men served local churches while directing the camp in the summer. Dan Johnson was the first resident camp director (1970–1976). After that time, the camp enlisted both a summer director and winter director for many years. Harold Constant served as winter director from 1977 to 1984. Craig Busho directed the camp for one summer (1977) followed by John Safford (1978–1984). Safford, a schoolteacher in Iowa, commuted to Bass Lake each summer to lead the camp. Another key beginning took place when Paul Lobb became the camp director in 1985 while assuming the role as state representative of the Minnesota Association of Regular Baptist Churches. Today Darrell Friar ministers in this same capacity.