Megachurch in the Middle of Nowhere 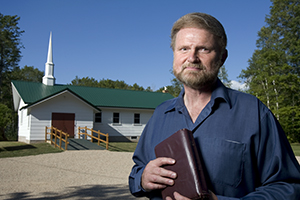 “Mission Church Destroyed by Fire” was the headline in the Baptist Bulletin.

The 1969 fire came at exactly the wrong time. Area churches had sacrificed to renovate and enlarge an older Swedish Lutheran building, assisted by missionaries with Hiawatha Land Independent Baptist Missions. The church was looking forward to the dedication service as workers finished the remaining tasks. Breaking for lunch, missionary Homer Baker left his tools in the back of the auditorium and drove up the road for a lunch with Pastor Warren Jolls. When they returned, the wood frame building was engulfed in flames.

Ted Jolls was in the eighth grade at the time. “Dad drove down to the school to tell me the building burned to the ground,” he recalls. “It was gone in one and a half hours. Nothing left by the time I got back from school. By the time I saw it, it was a pile of ashes.”

Warren Jolls had graduated from Moody in 1944, married Laura Bruett, and immediately joined the Hiawatha Land missionaries. He planted a church in Van Meer, Mich., started a church in Perkins four years later, and filled the Limestone pulpit when needed. All three towns dotted the edge of the Hiawatha National Forest. Then Warren Jolls became pastor at Limestone and stayed for 31 years.

Hiawatha Land got its name from Longfellow’s epic poem of Native American life. Hiawatha was Longfellow’s mythic hero, and the name continues to dominate the landscape of Michigan’s Upper Peninsula. Limestone Baptist Church is on the road to Gitche Gumee, the Chippewa name for Lake Superior, Longfellow’s “shining Big-Sea-Waters.”

But Ted Jolls does not describe his hometown with romantic terms. “The tourists would come to visit and call this ‘golf country.’ Oh, no it’s not! Limestone was a wicked place when I was a kid. Incest, rape, murder, alcohol. Every form of wickedness you can imagine.”

Ted describes the Upper Peninsula as a place where people came to disappear, often for good reason. When tourists asked the classic “Have you lived here all your life?” the standard reply was, “Not yet.”

But this answer didn’t suit Ted, who paints his school life in bleak colors. “I stuttered in high school, so I was beat on a lot,” he says. “I once said I would never return to Limestone. I didn’t want to come back.”

Ted Jolls is waiting for us when we drive into the parking lot at Limestone Baptist, a two-and-a-half-hour drive once you cross the Mackinac Bridge. The township hall is just up the road, along with a market and a few taverns. Four hundred people live in the township, and the locals are happy to acknowledge this is still the middle of nowhere.

“Today you wouldn’t plant a church in a place like this,” Ted says, shaking my hand and gesturing to the forest.

Yes—Ted is now the pastor of his father’s church.

He left home for awhile, studying at Grand Rapids Baptist College and later graduating from seminary. He married his wife, Lynda, and pastored a church downstate. His father continued to minister at Limestone until a heart attack led to his 1992 retirement. After 50 years of marriage and church planting, Warren and Laura Jolls were named missionaries emeritus by Continental Baptist Missions, successor to the Hiawatha Land mission.

At this point, Ted began to reconsider his threat to leave and never return.

“God works in your life in funny ways,” Ted says. And then he adds, “I stopped stuttering when I stopped thinking about myself.”

“Now I’m standing on my dad’s shoulders. My dad was a pioneer.”

Ted gives us a tour of the church, walks us around the stakes marking off the proposed building addition, and shows us the soccer fields and picnic shelter at the back of the property. Limestone Township has a wide variety of age groups; the church tries to reach them all.

“Limestone Baptist is large enough to have programs for each age group but is small enough to keep the family feeling,” he says.

Their weekly Awana ministry works a bit differently than most. The school bus drops kids off at church on Wednesday afternoon, right after school lets out. Partway through the program, church members serve the kids supper, then parents come to pick them up. Later in the evening teens from the community come by for activities and a Bible study. Almost none of them come from a Christian home, so the program is geared toward evangelistic outreach.

Ministering in a hunter’s paradise, Ted has developed a yearly Sportsman’s Dinner that attracts most of the town. Last year 140 came, and over the years, 18 have been saved. He has a few simple rules that allow the event to run smoothly:

The church also sponsors two major summer events: a Vacation Bible School program that often includes the help of a missions team or partnering church, and a community soccer camp.

“Brother Ken knows how to match churches together,” Ted says, calling the sister churches “an amazing shot in the arm, a tremendous encouragement.”

Ted, who has led his church to apply for fellowship with the GARBC, is also participating in a new network of 15 Baptist churches in the Upper Peninsula (see “Pastors Form Upper Michigan Association,” September/October ). “You can feel isolated; then you meet other people from other places who are just like you,” he says.

Ted recalls a difficult period when his father was pastor, when 30 of the 60 members moved away from Limestone in a six-month period, all searching for jobs downstate. In a similar way, the church continues to recover from the effects of the 2008 recession. Church health seems to be directly connected to the economy, and the Upper Peninsula still has its dark side. Locals say the economy is driven by summer tourism, winter recreation . . . and the state prisons, which are located in Baraga, Marquette, Munising, Newberry, Marenisco, and Kincheloe.

And if a pastor hopes to reach out to every person in the community, well . . .

“Sooner or later, everyone starts some sort of prison ministry,” Ted says of the area churches. But his location has taught him to rethink ideas about The Perfect Church.

“Many are afraid to go to church because they think it is a showcase for perfect people,” he says. Instead, he describes Limestone Baptist as a place where all Christians are in the process of growth, not reaching perfection until they get to Heaven.

Reviewing all of the church’s connections to its community, Ken Floyd puts it a different way: “This is a megachurch in this area, carved out of a desecrated place in the wilderness.”

Ted, who might be embarrassed by Ken’s label, agrees that the gospel has changed his town. “This was a wicked place, but light drives out darkness,” he says.

Previous post Resolution: A Warning about Compromise and a Call to Compassion