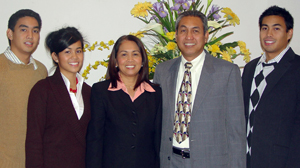 Fil-American Baptist Church, Chicago, Ill., was organized in 1978, when a group of Filipino Christians started meeting together. Fil-American purchased its present property in 1996. Now under the leadership of Pastor Ruel Akut and his wife, Jocelyn, the church has started an outreach in the suburbs, which meets at Book Road Baptist Church in Naperville, Ill., and has planted a church in the Philippines. Pastor Akut says Fil-American wanted to be part of the GARBC because “there’s so much history in it and there’s a lot of affinity—especially doctrine.” He says, “We are on the same page, so we believe we will be comfortable” with the GARBC. “We praise God we are with this group. We believe we can be of help to each other.”

Harvest Baptist Church, Williamsburg, Iowa. Pastor John Sauser says, “God started doing a work over here in Williamsburg. People recognized it and were convinced that God was leading in such a way that someday we would be planting a church there. They just weren’t sure when.” In God’s timing, “when” was October 2001. The church started as an offshoot of Faith Baptist Church in Iowa City. Harvest Baptist joined the GARBC because that’s where its roots are. Pastor Sauser says he is “familiar with the uniqueness of the GARBC’s strengths as an association of churches working ‘together,’ as we often hear, ‘to accomplish more.’ ” He says, “We need one another as sister churches, just as we need one another as individual members of a local assembly.”

Chalco Hills Baptist Church, Omaha, Neb. This church plant began as an offshoot of Gretna Baptist Church, Gretna, Neb., itself a young church. Pastor Blane Barfknecht says, “The Lord is doing good things. We’re seeing people grow in the Lord and come to faith in Him. We’ve increased about 30 percent from a year ago.” He points out that starting “from scratch in an area like Omaha that’s predominantly Catholic” takes time, but he says “it’s encouraging when you look back and see that it is increasing.” Pastor Blane and Kelly Barfknecht and the Chalco Hills family appreciate the GARBC’s commitment to sound doctrine and theology, the independence of the fellowshipping churches, and the encouragement that comes from having an association of like-minded people.

Desert Hills Baptist Church, Buckeye, Ariz. Adam and Elizabeth Zamora are pastor and wife of this church plant. The Zamoras are sponsored by a church they started in California and by Baptist Church Planters. The Zamoras knew of four adults in the Phoenix area “who would probably join with us” when they started meeting in 2007. On the first official Sunday, 35 people attended and guests have visited each Sunday since. The relationship between BCP (and its director, David Little) and the Zamoras has led the church to a relationship with the GARBC. Pastor Zamora appreciates BCP’s view of church planting, which is shared by the GARBC. He says, “The GARBC has a very positive outlook on expositional preaching and teaching and holding to good doctrine.”

Heritage Baptist Fellowship, Berlin, Wis., began as a “cold start,” meaning “you don’t have anybody asking you to come in to start with,” says missionary-pastor Philip Skramstad. He and his wife, Sandra, started the church with one couple four years ago. The church now runs about 40 people. Pastor Skramstad says Heritage Baptist agrees with what the GARBC believes and appreciates its support. “We don’t want to be here like the Lone Ranger,” says Pastor Skramstad. In addition to help from churches who support the Skramstads through Continental Baptist Missions, the church receives help from the Wisconsin Association of Regular Baptist Churches’ Partners in Planting ministry. The WARBC “helps us by paying the rent on a storefront in downtown Berlin,” says Pastor Skramstad.

Oasis Baptist Church, Aburndale, Fla., is sponsored by Faith Baptist Church, Winter Haven, Fla., which has helped with people, prayer, and finances. The Oasis church body is young, like Pastor Jason Seger and his wife, Priscilla. He says the church is targeting people in the 30-to-50 age range. Pastor Seger was new to the GARBC when he started attending Faith Baptist. From the beginning, he appreciated the emphasis on “God’s Word, living out God’s Word, and knowing what it is you believe.” Concerning fellowship with the GARBC, Pastor Seger says, “We definitely want to be aligned with like-minded churches, and to be able to learn from others, and to have access to the resources that are out there.”