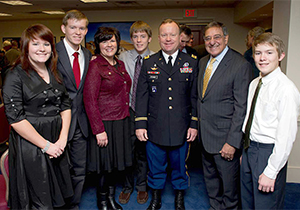 During his tenure as the division chaplain, Chaplain Stumme will be responsible for the shepherding of more than 80 chaplains and chaplain assistants of all faiths, and for the spiritual leadership of 22,000 soldiers in the 82nd Airborne Division. As one of only 11 division chaplains in the United States Army, Chaplain Stumme is uniquely positioned to bring God to soldiers and families, and soldiers and families to God.

“To be named one of the 11 division chaplains in the United States Army is an honor that recognizes the exceptional ministry Chaplain Stumme and his family have had over the years,” says Chaplain John Murdoch, director of Regular Baptist Chaplaincy Ministries. “His leadership in the Army Chaplain Corps has been a great testimony for God and our fellowship of churches. Please uphold Chaplain Stumme and his family in prayer.”