MONROVIA, Liberia—In 2003 the country of Liberia sighed in relief: the Second Liberian Civil War had ended. And although the city’s infrastructure lay in ruins, a Baptist church had flourished. 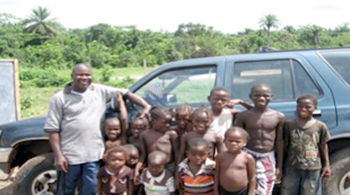 MONROVIA, Liberia—In 2003 the country of Liberia sighed in relief: the Second Liberian Civil War had ended. Enduring over a decade of armed strife was a Baptist church in Monrovia, the nation’s capital. Although the city’s infrastructure lay in ruins, the church had flourished.

It began with a missionary. Walter Smith (Baptist Mid-Missions) laid the foundation for the church when he started a Bible study in Clara Town, a part of Monrovia, with a small group of Bassa believers. (These were native Liberians, not transplanted freed American slaves or their descendants.) Missionary Ray Dunn continued the work Smith had begun, and Calvary Baptist Church was planted, eventually putting down roots on 18th Street.

But Calvary Baptist doesn’t simply plant churches. It has also established schools, a Bible college, and radio ministries while continuing its “regular” church outreaches. These include Awana, camping, student ministries, and discipleship programs.

Someone has said, “A legacy of the war is a large population of homeless children and youths, either having been involved in the fighting or denied an education by it.” For that reason, the church’s Calvary Baptist School System is vital to the nation as a whole, as well as to Christian outreach. Pastor Glave Vaye says, “The schools in Monrovia have a combined total of more than 1,200 students for this gone academic year. For the past 13 years, the high school has graduated more than 1,500 students, many of whom are serving Liberia and other parts of the world as doctors, nurses, administrators, pastors, politicians, etc. The church has also trained many pastors and schoolteachers who are presently serving our churches and schools.”

God has blessed Calvary Baptist’s first 50 years, but the church needs help to do more. Pastor Vaye says, “All that Calvary has achieved over the years has been done by the grace of God through the giving of members, some former members, and few friends abroad. For example, more than 95 percent of the church sources of income are from tithe and offering. The school depends solely on tuitions for its operations. With so much to be done and with limited resources, the church is appealing to its former members and friends abroad to help with some of its present priorities and needs.” For more information, contact Chris Hindal, director of GARBC International Ministries.

Calvary Baptist Church (representing the association of its church plants) is a partner in the International Partnership of Fundamental Baptist Ministries. Hindal says, “Pastor Vaye is a fine pastor who is a capable leader. It was a special joy to have him participate in the All-African Regional Conference of the IPFBM in October 2011.” The GARBC is one of 58 partnering associations in the IPFBM.