‘Less about Doing, More about Being’ 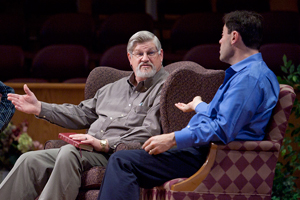 LANSDALE, Pa.—At a conference sponsored by Calvary Baptist Seminary this week, one message has been delivered without any preaching: No time will be wasted worrying about the traditional taboos of cultural fundamentalism. Far weightier matters demand serious attention.

Mark Dever raised the issue of taboos on Tuesday afternoon, observing that he and his interns had carefully planned what they would wear during their first visit to a fundamentalist Baptist conference. “We’ve definitely had more minor issue forethought to this invitation than any other that I’ve taken,” he says. “Normally, I probably would have jeans on, and I think that most of the guys [his interns] would be dressed a little bit differently than they are now.”

Tim Jordan answered Dever’s observation by addressing the audience: “How many of you guys would normally wear jeans?” Most raised their hands (with those already dressed in jeans apparently voting early).

Dever repeated some good advice he had passed along to his interns as they packed for the event, saying, “My goal is to make dress nondistracting, to make as many different kinds of people comfortable, just not make dress an issue.”

Dave Doran couldn’t resist interjecting with “That’s why Kevin [Bauder] leaves his earring out when he comes here.”

Over the laughter Bauder adds, “But I trim the dreads.”

[Reader alert: Bauder does not have dreadlocks, but he did arrive at the conference with more facial hair.]

Later in the afternoon, I ask Bauder about his new look, what some might even call an Evangelical Man Goatee (which he grew after a fall hunting accident).

Mark Dever, the clean-shaven evangelical man, was quick to pick up my cue, asking, “Maybe it’s a homage to Francis Schaeffer? Homage to Phil Johnson?”

But the gentle ribbing among conference speakers seemed to have a purpose. This much is clear—they had been talking to each other long before they gathered on the platform of Calvary Baptist Seminary, and about matters more serious than dress codes. Their brief bursts of humor (often about fundamentalist foibles) seemed calculated to draw attention to much more substantive issues—including the misuse of Biblical separation.

Both Doran and Bauder have recently offered pointed critiques of fundamentalists who hold extreme positions on Bible translations, suggesting that militant advocates of a KJV-only position have strayed from Christian orthodoxy. (During the conference, Tim Jordan preached from the ESV, Mark Dever from NIV, Kevin Bauder from KJV, and Dave Doran from the NASB.) Are fundamentalists willing to uniformly apply their beliefs about separation from false doctrine? If so, Bauder and Doran suggest that a fissure is inevitable.

Mark Dever used his Wednesday morning sermon to call fundamentalists to a more rigorous practice of church discipline. “You want to talk about separation? If the local church in Corinth does not separate itself from unrepentant sinners, it will cease to have any gospel impact at all.”

But Dever also aimed his sights on his own denomination, the Southern Baptist Convention. Summarizing their 30-year efforts to purge liberalism and modernism from SBC seminaries and churches, Dever suggested the task was successful. But he expressed concerns over SBC churches still using a “CEO model” that resorted to “sold out ecclesiology . . . completely pragmatic.”

“This is how we did it in the south: We’d have people walk up the aisle, ask them to join the church, and voted them in with an ‘Amen,’ which explains why the Southern Baptist Convention is not always a witness to Christ,” Dever said. “We just opened the door and said, ‘Please come in.’”

“So they believed in inerrancy but sold out the gospel,” Dever said.

While the conference speakers came from different backgrounds, they shared a willingness to critique their respective movements on issues of common concern. In particular, Dever’s review of Baptist polity resonated with his fundamentalist hosts.

Addressing Dever near the end of panel discussion, Bauder said, “You and I are from very different branches of what broadly may be called Baptist. But your articulation of Baptist principles is virtually a carbon copy of principles I grew up learning in Baptist fundamentalism.”

And yesterday during a Baptist Bulletin interview, Bauder gave Dever a more specific comparison. “Listening to you last night, I thought I was listening to Ketcham. What you had to say, and what he used to say, other than the last two minutes (about elders), were so close.”

Known for his study of early Baptist documents, Dever does not claim originality, saying, “I have nothing new to say. I am an ambassador from your great-grandparents!”

Doran’s Inter-City Baptist Church in Allen Park, Mich., is known to have conservative music and dress, but he is a strong critic of “preaching that replaces Christ with abstract theory or man-made strategies for holiness.”

He cautioned pastors in the attendance to avoid getting caught up in “what they do for the Lord” rather than growing toward completeness in Christ. “Think less about doing and more about being,” Doran says.

His words seemed to be a fitting summary to a fascinating conference. The Baptist fundamentalists who spoke here are not moving closer to conservative evangelicalism, but they are thinking more seriously about how the two movements overlap. Mark Dever will not drive home as a convert to fundamentalism, but he will continue to articulate appreciation for friends who are together for the gospel, together for historic Baptist polity, together for holy living.

Most will change into jeans before they drive home. There’s work to be done.

Next post Pray for Pastor and Val Silverberg's Son