SEBRING, Fla.---The Ladies' Missionary Fellowship of Maranatha Baptist Church is excited about its outreach efforts that have reached around the world. 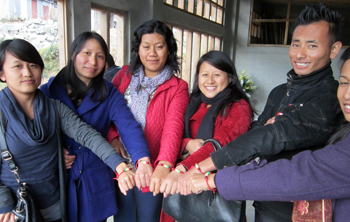 SEBRING, Fla.—The Ladies’ Missionary Fellowship of Maranatha Baptist Church is excited about its outreach efforts that have reached around the world. The ladies began their year in September by hosting an International Smorgasbord. The church’s missionaries submitted recipes from the fields where they serve, and the ladies prepared and enjoyed the various dishes while getting better acquainted and upholding the missionaries in prayer. In October the group joined 13 other Florida churches in attending a GARBC state meeting for women and donated toward its project to aid in the rebuilding of a home and security wall for a family in Haiti. Both had been damaged by the 2010 earthquake.

On a workday in November, the ladies made 500 gospel bracelets that they sent to Chris and Darcy Vergiels, Baptist-Mid-Missions missionaries to Brazil, and Dr. Ken and Alice Cole, missionaries to Southeast Asia with the Association of Baptists for World Evangelism. When teens in Thailand received their bracelets, they wanted more so they could share the gospel with others using the bracelets’ “wordless book” colors. In February, the ladies took up the project again, this time making and sending bracelets to Bill and Tamra Branks, missionaries in Chicago with Continental Baptist Mission; Tom and Joyce Walmsley with Amazing Grace Mission; Andy and Stephanie Pace, ABWE missionaries to Peru; and Glen and Dorothy Budd, also in Peru with ABWE.

In March the Ladies’ Missionary Fellowship attended another GARBC state ladies’ meeting. There they donated funds toward the Pastors’ Enrichment Library project, whose goal was to raise $1,500 to purchase 10 libraries for pastors in Spanish-speaking countries. Editorial Bautista Independiente in Sebring, Fla., has assembled 26-book libraries to be purchased by pastors for $20, and groups like the Ladies’ Missionary Fellowship are raising the rest of the funds to pay for the libraries; EBI is covering the postage.

As a final project of the year, the group hosted a Bootie Party to collect booties that several of the women had made. A little over 400 booties were collected and would be sent to several people and locations: Glen and Dorothy Budd, and David and Evelyn Stone, both ABWE missionaries to Peru who have prenatal clinics, but who are located 500 miles apart; Jim and Janice Mitchell, missionaries in Colorado with Baptist Church Planters; the Metro Women’s Center in Minnesota; Flint Crisis Pregnancy Services in Michigan; and John and Wendy Patton, ABWE missionaries to Spain, who received two pairs for their new baby. The ladies also placed a few pairs in the church’s own missionary closet.

All of these projects have been inspired by the group’s theme verse: “To give unto them beauty for ashes, the oil of joy for mourning, the garment of praise for the spirit of heaviness; that they might be called trees of righteousness, the planting of the Lord, that he might be glorified” (Isaiah 61:3).

Yes, the gospel can be shared from a distance across all kinds of media. But it’s most effective, and spreads at a much more rapid ...more

The GARBC and its ministries offer FREE resources that can help you, your family, and your church be wise and strong in Christ while the ...more

Ministering in the Worst of Circumstances

During the past couple of weeks, some of our chaplains who serve in the National Guard and Reserves have been activated to minister to soldiers ...more