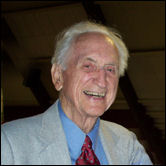 Raised on an Ontario farm in a family of ten children, George Hunt planted four Baptist churches in Canada before he turned thirty. After moving to the United States in 1951, he pastored several GARBC churches and continued as a leader in church planting and Christian education.

“I’ve always been interested in church planting as well as seeking to promote world wide missions,” said Dr. Hunt in 1993. “The church fellowship should be the happiest place in the world—should be warm and responsive to the needs of its community. The church should promote its colleges to their young people so they will be assured of excellent training.”

L. George Hunt died on Monday, Sept. 1, in Seal Beach, Calif., having been diagnosed with lung cancer only a few months ago. His daughter-in-law Mary described him as “the cleanest-living man on earth” who celebrated his ninetieth birthday just a few weeks before passing away.

“My oldest brother, Harvey, received Christ as his Savior in 1933 and led me to the Lord that same spring,” wrote Dr. Hunt in 1993. “What a difference in my life! Joy and peace came in to my life and a desire to serve God in some way. That wonderful summer my whole family received Christ as Savior at a Bible camp in our vicinity. In the following years a new fundamental Baptist church was planted in our town.”

Dr. Hunt, who was named after the British Prime Minister Lloyd George, described his home as “a haven for prayer meetings and Bible study (where) many great missionaries were introduced to our family life.”

Graduating from London London Bible Institute (now Ontario Bible College) and expecting to serve in the Canadian Armed Force, his life took a boldly different turn when he was asked to be the Bible teacher for group of believers near his home. He organized the Bible study into the Bethel Baptist Church of Fergus, Ontario. After briefly serving as their pastor, he then left to plant a succession of Canadian churches.

He is survived by his sister, Martha Holding, age 99; his children, Lloyd, Gordon, Harold and Lois; seven grandchildren; and eight great-grandchildren.

“As I look back, the Lord has been so gracious in allowing me the privilege of being involved in the beginnings of many new churches, in a building program in every pastorate, and in giving me a gracious Christian wife, children, and grandchildren.”