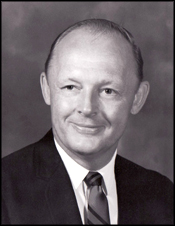 Polson, a Navy veteran who served his country at the end of World War II, pastored a number of GARBC churches, including Grace Baptist, Austin, Minn.; Hagerman Baptist, Waterloo, Iowa;  Ankeny Baptist, Ankeny, Iowa, one or two pastorates in Florida and Indiana; and Wealthy Park Baptist, Grand Rapids, Mich. He was instrumental in moving Faith Baptist Bible College from Omaha, Neb., to Ankeny, Iowa, and he worked in development for the college. Dr. Polson also served as president of Spurgeon Baptist Bible College, Mulberry, Fla., and he was also a planned giving officer/conference speaker for ABWE.

He is survived by a daughter, Karen Denger of Panora, a son John Mark of Orange Country, California, and other relatives. Dr. Polson will be remembered as a gifted Bible teacher.

Next post RBP to Participate in Empire Fellowship Fall Conference