NEVADA, Iowa---Thirteen members of Nevada Baptist Church spent two weeks assisting Baptist churches in Haiti in the aftermath of the January earthquake that devastated the capital city of Port-au-Prince. 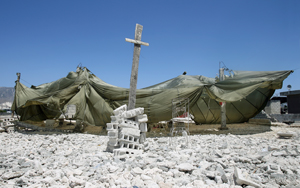 “We came to greatly respect and appreciate his ministry as a pastor, director of the orphanages, and national representative for the Baptist churches in Haiti,” says James Reynolds, assistant pastor of Nevada Baptist.

The Nevada church spent four days at the boys’ orphanage and four days at the girls’ orphanage, originally intending to teach two Bible lessons each day. “After some translation issues and space issues, we had to modify our plan,” Pastor Reynolds says. “God reinforced in our minds that we were there to care. We were able to teach some, but the majority of our time was spent playing with and loving these wonderful children who are living in these orphanages.” 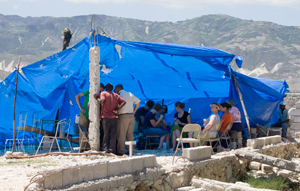 The missions team also intended to help clear fallen buildings and rebuild some of the churches damaged in the earthquake. But the group soon discovered that local Haitian churches had different needs, already having laborers (church members who were out of work) but not having any money for basic supplies.

As a result, the Nevada group gave a financial gift to Pastor Rony Lapointe to erect a temporary building where his church could worship. Previously the church was meeting on church benches under a large green parachute they scavenged for shade. Several members of Pastor Lapointe’s church were killed in the earthquake, including his assistant pastor, but attendance has doubled since the quake and many people have made professions of faith.

Pastor Dennis Reynolds, pastor of Nevada Baptist, also traveled with Pastor Hérard to visit damaged churches and pastors’ homes, gathering information about the cost of rebuilding. The Nevada group returned to the U.S. with specific information on how U.S. churches can help churches in Haiti. The biggest help will come in the form of financial donations, Pastor Reynolds says, suggesting that Haitian pastors could use the funds to purchase building supplies, church furnishings, and hymnals. 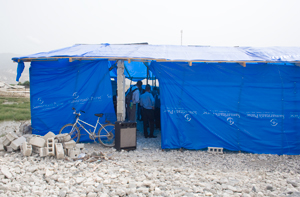 “Haiti is one of the most naturally beautiful places I’ve ever been,” says Reynolds, who has previously been on missions trips to Brazil, Colombia, Hawaii, and Europe. “But at the same time, Haiti shows what can happen when humanity mars the glory of God. I walked on a beautiful beach that was destroyed by floating garbage.”

“We saw a distinct contrast between some of the church people and other Haitians who have pretty much given up hope. From this, I learned that I need to be encouraged in my own ministry. These pastors who have lost homes, churches, and family members are still out every day devoting themselves to the ministry of God’s Word.”