DES MOINES, Iowa---Pastors’ kids share unique experiences and challenges, and Northridge Baptist Church has hosted a retreat to provide fellowship and encouragement among this group. 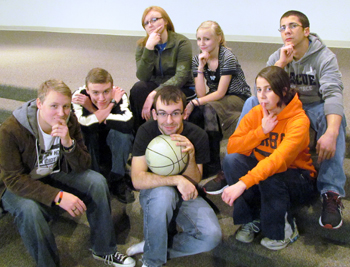 DES MOINES, Iowa—Pastors’ kids share unique experiences and challenges, and Northridge Baptist Church has hosted a retreat to provide fellowship and encouragement among this group.

For several years Iowa Regular Baptist Camp hosted a PK Retreat for junior highers and high schoolers throughout the state. But in 2010, the future of the retreats was unsure, after the camp decided not to hold the event that year. Kevin Subra, pastor of Northridge Baptist Church, Des Moines, Iowa, wasn’t ready to see the retreats go. “My own ‘PKs’ and I thought it was one of the best experiences ever, so we volunteered to host it,” he says, opening up the centrally located Northridge Baptist Church for attendees, including those out of high school.

Though Northridge Baptist lacks the zip line, indoor gym, and snowmobiles of a camp, it does have a kitchen, showers, and lots of space. And the cost is more affordable than at a camp. “We felt that the cost of the camp-based retreat could possibly be prohibitive to some pastoral families, so we chose to charge only what it took to break even on the food. Further, we decided to provide the teaching ourselves, in order to keep the cost down. (I require no travel expense or honorarium),” Pastor Subra says.

On Dec. 29 and 30, PKs gathered for the second annual retreat at the church. They prepared meals and cleaned up, and in between they played board games, dodge ball, and the ever popular hide-and-seek game Sardines. “Their desire is to spend time together, and they have fun whatever they are doing,” Subra says.

The overnight retreat was not without Biblical teaching. After hearing from Pastor Subra, the group performed a “flash drama,” a short skit they produced ad hoc related to the topic they were learning. “Our church family is keen on having fun with a purpose—using activities as learning tools, not just as means in and of themselves,” Subra says. Last year the PKs produced “Of Sandals and Scandals: Joseph Gets Jailed,” which coincided with accounts of Biblical teens who made a difference in hard times (Joseph; Esther; Daniel; Shadrach, Meshach, Abenego). Subra wrote the skit several years ago while working with the Northridge teens. In just a few short sessions, the PKs determined how they would present the multiscene skit, using props and costumes on hand. (The account of Joseph’s temptation with Potiphar’s wife became a news report skit.) The PKs ended up with a recording that they posted on YouTube. A side benefit of recording the skit, says Subra, is watching the bloopers that develop.

This year Subra first covered a 12-point Bible overview that he has developed and fine-tuned over the years. “It is like Walk Thru the Bible, but much more simple, covering the entire Biblical timetable in 12 points—eight for the Old Testament and four for the New Testament, each with easy-to-remember subpoints,” he explains.

Subra also taught on David during the retreat, opting to teach topics that would be intensely challenging. “Since we were hosting PKs, we felt that we could suspend with the basic teaching and really discuss some more advanced topics regarding spiritual leadership and making a difference.

This year’s retreat also added a new element: a Spanish retreat was held simultaneously. The two groups combined to watch the film Courageous. Northridge Baptist had purchased a DVD that is licensed to show as a church, and it arrived just in time. “Most of the Hispanic teens speak English,” Subra says, “but they got an extra kick out of the Hispanic family and the Spanish-driven humor in the film.” (Northridge Baptist Church regularly holds services in Spanish each Sunday with Pastor Kent Spencer.)

Pastor Subra says the PK Retreats are “second to none,” for nothing better ministers to a group of young people in a unique situation.