ALTOONA, Iowa---“It’s not very many pastors who are around to preach at the 50th anniversary of the church they helped start,” noted Russ Farrell, fouding pastor of Altoona Regular Baptist Church. 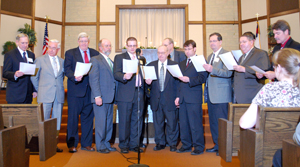 ALTOONA, Iowa—“It’s not very many pastors who are around to preach at the 50th anniversary of the church they helped start,” noted Russ Farrell, founding pastor of Altoona Regular Baptist Church, as he delivered the Sunday morning message. Farrell, who helped plant the church in 1961—preaching on Sunday mornings to the fledgling congregation after delivering the same message earlier that morning to the congregation he served (Adelphi Calvary Baptist in Runnells, Iowa)—was among the guests of honor who helped reflect on the goodness of God over the church’s five decades of ministry. Other former pastors who returned for the celebration included Tim Crown (pastor, 1976–1988), Mickey Farlow (associate pastor, 1977–1989), and Greg Linscott (associate pastor, 2001–2003).

The celebration began with a Saturday evening meal and service that featured music and testimonies from former members, including Pastor Terry Davenport, now serving as pastor of Calvary Baptist, Webster City, Iowa. Davenport served as a youth leader under Eldon Weaver, the congregation’s first full-time pastor.

The evening concluded with a message from Pastor Greg Linscott, now serving in Marshall, Minn. Linscott led the youth at Altoona while he and his wife, Jennifer, were students at Faith Baptist Bible College beginning in 1996. Linscott reminded those in attendance of how God’s faithfulness and provision of the gospel united ARBC members from every era in the church’s history.

Sunday’s services featured more music and testimonies. A musical highlight was a piano duet by former members Liz (Rogers) Augsburger and Christa (Kober) Pearson. Both ladies were national winners at the GARBC Talents For Christ competition as teenagers in the 1990s. Mickey Farlow, now pastor of Calvary Baptist Church, Quincy, Ill., reminisced about the times he and his wife, Joyce, had serving the Altoona youth under Pastor Tim Crown. He reminded the congregation of the benefit of “mountaintop experiences” that God can use to alter our perspective.

Sunday’s concluding message from Pastor Tim Crown, titled “I Remember When . . .” was emotionally laden, as he recalled God’s goodness demonstrated in his years at Altoona.

Pastor Chris Humburg took the time to publicly express gratitude to the individuals whose tireless efforts in organizing the event were evident in the success of the weekend. He and Associate Pastor Ryan Lundquist honored former pastors and wives with a “mugging,” which consisted of each individual receiving a commemorative coffee mug. Pastor Russ and Marilyn Farrell concluded the celebration by cutting an anniversary cake. “What a memorable evening!” remarked one former member. Evidence of God’s gracious providence was evident in the recounting of events both past and present—a testimony “to the praise of the glory of [God’s] grace” (Ephesians 1:6).

Previous post Resolution: The Duty and Power of Prayer