CLARKS SUMMIT, Pa.---The General Association of Regular Baptist Churches ended the fiscal year by nearly breaking even, showing a net loss of $5,417, according to Michael Nolan, director of business administration and treasurer. 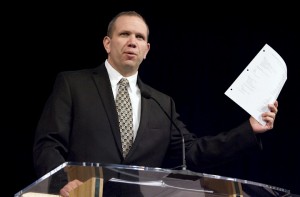 CLARKS SUMMIT, Pa.—The General Association of Regular Baptist Churches ended the fiscal year by nearly breaking even, showing a net loss of $5,417, according to Michael Nolan, director of business administration and treasurer.

Calling the financial year ending on April 30 “especially challenging,” Nolan noted that the fiscal year began with an expected $250,000 operating loss and the possibility of borrowing money short term. But the organization implemented substantial cost-cutting measures, including staff reduction, lower printing costs, and a spending freeze. As a result, Nolan says the year ended with cash in the bank, $0 owed on a line of credit, and no late payments on any of its obligations.

Nolan also reported that the GARBC had just received its auditor’s report from Capin Crouse, affirming that the financial statements “present fairly in all material respects the financial position of the General Association of Regular Baptist Churches.” The GARBC is audited every two years. In the alternating years, Capin Crouse performs a formal review of the GARBC’s financial statements.

When broken out by individual ministry, Regular Baptist Press showed a net balance of $388,219. This was offset by other ministry areas where expenses exceeded its revenues for this fiscal year: GARBC ($164,300), Regular Baptist Chaplaincy ($9,344), Baptist Builders Club ($51,167), and International Ministries ($1,648). The audited statements show that designated donations (temporarily restricted net assets) are being spent on the projects for which they were intended (though the funds are sometimes disbursed in a different fiscal year than when they were collected). Nolan is quick to point out that financial reports are a snapshot in time, showing the financial picture at a given moment. Despite the challenges of the past year, he expressed gratitude for the organization’s overall finances.

“It is essential for long-term viability that we plan for the addition of donor churches and individuals, efficient business practices, and product sales,” John Greening said in his report as national representative. “Each of these three components contributes to a financially sound organization.”