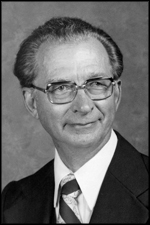 Harry B. Gray, the former dean of education at Faith Baptist Bible College and architect of its transition from Bible institute to accredited college, died on June 7. He was 91.

Gray was born Sept. 3, 1918, to Ben and Martha Gray in Bunker Hill, Kan. His mother was born in Bohemia and spoke Czech, which was also spoken at his home church, First Baptist of Wilson, Kan. He was baptized at age nine in the Smokey Hill River and left home at 18 to attend Moody Bible Institute, beginning a significant period of academic accomplishment.

After earning a diploma from Moody Bible Institute (1939) and taking additional coursework at Herzl Junior College in Chicago (1940–41), Gray would eventually earn the following degrees: ThB, Northern Baptist Theological Seminary (1945); BA, Wheaton College (1947); BD, Northern Baptist Theological Seminary (1948); ThM, Winona Lake School of Theology (1953); and ThD, Dallas Theological Seminary (1956). During his career Gray studied Bible exposition with Will Houghton; Greek with Kenneth Wuest and Julius Mantey; and theology with Carl F.  H. Henry, John Walvoord, and Charles Ryrie. His doctoral dissertation was on the eschatology of cults, a subject he continued to teach for most of his career.

Raised and educated in the Northern Baptist Convention during the fundamentalist/modernist controversy, Gray became a passionate advocate of Biblical separation. “I thank God that, in nearly half a century of my ministry in this fellowship, the gospel message is still being clearly proclaimed,” Gray said of the GARBC in 2002. “Students I have taught are still out winning the lost, and hopefully the next generation will continue the fundamental, Baptistic message of the Scriptures.”

He was pastor of First United Baptist Church, Cicero, Ill. (1941–47), where he prepared two sermons in Czech every Sunday. Harold Lindsell preached at his ordination service in 1944, the same year Gray married the former Audrey Tong. They had three children: Jenetta, Paul, and Melody.

The couple moved to Winnipeg, Manitoba, Canada, where Gray was pastor of Bethlehem Chapel (1948–51). During this time he began teaching and eventually became dean of Winnipeg Bible Institute and College of Theology (now Providence College and Theological Seminary).

In 1955, at the invitation of President John L. Patten, Dr. Gray joined the faculty of Omaha Baptist Bible Institute (now Faith Baptist Bible College in Ankeny, Iowa). Promoted to academic dean in 1958, Gray developed a full catalog of classes, recruited a generation of professors, and led Faith to receive accreditation from the American Association of Bible Colleges (now the Association for Biblical Higher Education) in 1970. He served on the accrediting commission of the AABC and was a member of the Evangelical Theological Society.

During the family’s Omaha years, they were members of Grace Baptist  Church. Later they were part of a team that helped plant Heartland  Baptist Church in Bellevue, Neb. When the college campus moved to  Ankeny, Iowa, the Grays joined Saylorville Baptist Church. After a  lengthy illness, Audrey died of cancer in 1970. Gray was 52; his  youngest daughter Melody was 14.

Writing his autobiography many years later, Gray reflected on his experiences as a single father raising a teenage daughter. “We survived, but frankly, Melody wasn’t the best housekeeper and evidently she wasn’t too impressed with my cooking!”

Two years later Harry Gray asked Dr. David Nettleton for some personal advice: “If your wife died, who would you recommend to marry?” Nettleton suggested a blind date with Gladys Charlton, who grew up at Grandview Park Baptist Church and was formerly the dean of women at Baptist Bible Seminary, Johnson City, N.Y. The new couple married on Sept. 1, 1972, and joined Slater Baptist Church.

Faith honored Dr. Gray by naming the classroom building Gray Hall upon his retirement in 2000. He was also the first Faith faculty member to be recognized with the designation of “Distinguished Professor.”

“I thank God for the privilege I have had over the years in making some contribution to the intellectual and spiritual growth of many young lives,” Dr. Gray wrote in his autobiog­raphy. “In some cases, over the years, I have had the privilege of teaching three generations in one family. It is rewarding and humbling to meet students of former years, and have them express appreciation for some contribution I have made to their preparation to serve the Lord.”

Dr. Gray is survived by his wife, Gladys, of Ankeny, Iowa; three children, Jenetta (Gain), Paul, and Melody (Cato); 14 grandchildren; and 14 great-grandchildren. He is preceded in death by his first wife, Audrey.

Harry Gray joined Facebook in 2009, learning the new Internet technology at age 90. In May, just before he was taken to hospice for the final time, he posted a final message to his friends and family.