Wednesday's wrap-up from the 2010 GARBC Conference in Schaumburg, Ill. 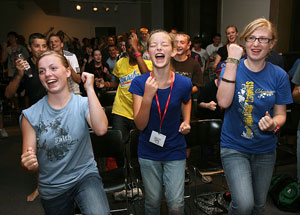 SCHAUMBURG, Ill.—Camp directors call Wednesday the hump day—that day when grumpy campers seem to tire of the food, the accommodations, the perpetually peppy counselors. But camp directors have learned another axiom: If the preaching is good, no one cares about anything else, not even rain.

And this week, the preaching has been exceptional. Happy campers, indeed.

Jordan called Daniel 6 a familiar Sunday School story that provides “a grand, simple, clear, illustrated story of one of the Bible’s more important premises: we exist for God’s glory.”

Webber introduced the speakers by commenting on their similar backgrounds and ministries, but added, “You would never mistake them for twins. Daniel is methodical, Tim is crazy, but both love the Lord. Both of them are the real deal.”

In the afternoon, John Greening and Michael Nolan hosted tours of the GARBC Resource Center, just a mile west of the Hyatt Regency conference center in Schaumburg. Guests were heard to say, “Impressive,” “Very neat,” and “Bigger than I expected” as they moved from department to department; most of the 200 visitors had never visited the building. Each tour ended in the photo studio for group pictures, then supper with genuine Chicago hotdogs (and no ketchup!).

Jim Vogel, associate national representative of the GARBC, hosted a meeting for pastors before the evening service, encouraging the pastors to explore the GARBC’s educational opportunities, support and consultation services, and church resources. Vogel gave each pastor who attended a selection of free books.

At the same time, Jim’s wife, Jeannie, hosted a reception for pastors’ wives that included testimonies, a devotional, and gifts for each who attended.

Teens left for what they expected to be a fun night downtown, leaving by train for a planned scavenger hunt. Activity organizers had to change plans quickly due to heavy rains and a tornado watch—read more in “Our God Reigns (Rains).”

John Greening welcomed six new churches to the GARBC during the evening service, offering them the right hand of fellowship.

“A handshake is a peer relationship, a greeting, a gesture of real respect and friendship,” Greening said.

Special music during the service was provided by musicians from Baptist Bible College (Clarks Summit, Pa.). Worship leader Ken Pyne continued his emphasis on the congregational reading of Scripture. But the many evening activities did not overshadow what has been a clear focus.

“The preaching this week—I have been so thrilled!” John Greening said as he wrapped up the third day of the conference. And to the gathered audience he asked, “Tell me who is winning?”

The answer came back louder, much louder than the thunder rumbling outside.