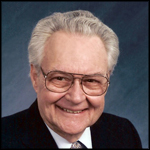 Heber Van Gilder, Jr., a pastor in nine GARBC churches across the Midwest and volunteer chaplain for many police and fire departments, died on June 24. He was 87.

Van Gilder was also a past vice-president of the American Council of Christian Churches and was a member of the original board of directors for Shepherds Ministries, Union Grove, Wis.

For the last 13 years, he and his wife lived in the Warm Beach Senior Community, Stanwood, Wash. During those years he was interim pastor for another two churches and chaplain to the local Fire District #14.

He is survived by his wife, Lena; his sons, Chip, Daniel, and Thomas; two grandchildren; four great-grandchildren; a sister; and several nieces and nephews.