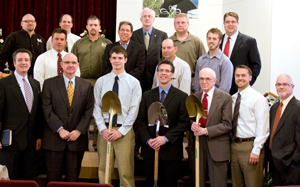 BATAVIA, N.Y.—Grace Baptist Church celebrated the ground-breaking of the 2.7 million dollar addition to its facility. “It was a glorious day, just perfect,” commented Associate Pastor Mark Hurlbut. “Both the ceremony and the weather couldn’t have been better,” added Tom Melzoni, a special guest from Ohio.

Over 300 people attended the event that coincided with Mother’s Day. “Moms are all about the future, the next generation; it was a perfect fit to celebrate both today,” said Pastor Don Shirk.

The ceremony included events both inside and outside the current facility. Mother’s Day was celebrated, and several moms were recognized. The congregation also recognized special guests involved in the construction process. Steve Hopper, president, and Eric Payer, project manager, are from M3 Development Corporation, the firm that designed and will construct the facility. Payer shared with the church about the joy it has been working with the building committee. Tom Melzoni, senior consultant with Generis Corporation, helped the church with its successful capital campaign in 2010. He gave an encouraging challenge to the church to keep moving ahead by faith. (Melzoni will be presenting a workshop called “Funding a Local Church Vision” at this year’s GARBC Conference in June.)

The congregation then moved outside, joining hands around a painted perimeter of the new facility while Shirk read Ephesians 2:19–22 and led a dedicatory prayer. Then all 350 joined the Honorary Groundbreakers in putting shovels into the ground. All the families and individuals of the church had been invited to bring their own shovels. Shirk explained, “This addition is not my addition, nor is it the building committee’s addition. This addition is the whole church’s addition. We thought it only made sense to have everyone bring a shovel and break ground together.”

Construction will now begin on a new worship center that will seat 500. Also included will be a 1,500 square foot nursery and preschool suite, a new office suite, new restrooms, coatroom, and a spacious lobby. The project, which took two years to design, is scheduled to be completed by summer and will help provide jobs in the church’s community and surrounding counties.