SCHAUMBURG, Ill.---Darrell Goemaat has been named alumnus of the year at Faith Baptist Bible College. He graduated from Faith in 1983. From there the path leading to a journalism career—and a ministry—becomes a bit more convoluted. 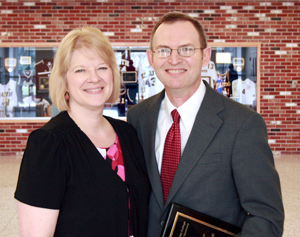 SCHAUMBURG, Ill.—Darrell Goemaat has been named alumnus of the year at Faith Baptist Bible College, honored during the college’s 2013 commencement exercises. The tribute was announced by Rev. Jeff Holub, alumni association president, who commended Goemaat for “his distinguished career as a Christian photojournalist and his godly character and service for Christ.” Goemaat works as director of photography for Regular Baptist Press and the Baptist Bulletin.

Goemaat grew up in Cedar Rapids, Iowa, and began classes at Faith in 1979, where he soon met his wife, Lynne. Both graduated in 1983. From there the path leading to a journalism career—and a ministry—becomes a bit more convoluted.

Finding a purpose in life

“This is the story of a young man who didn’t know what he wanted to do,” Darrell Goemaat said a few months ago, addressing a room full of journalism students at the Associated Collegiate Press media conference.

Darrell gave the students a condensed testimony about his days at Faith Baptist Bible College, where he took his first yearbook photos. Then he confessed how he had postponed that “purpose in life” question until his senior year. Actually, spring of his senior year. Late spring.

And he recalled some uncomfortable questions coming from Liz Gifford, English professor at Faith, who asked about his plans after graduation.

“I have none,” was Darrell’s easy response.

Gifford pressed on. “But you’re getting married, aren’t you?”

I was sitting on the side aisle when Goemaat told this story at the journalism conference. I’ve heard it a few times before, and it always makes me laugh. But as I looked around the room, his audience was following very closely. Interested in his answer, not amused.

After talking with some of the students later in the day, I began to understand how their stories are like Darrell’s story. The hot issue of “What are you going to do after graduation” can persist for several years after graduation, a murky puzzle that nags at people with more talent than forethought.

On that day back in 1983, Liz Gifford had leaned over her desk and asked, “What would you like to do if you could do anything in the world?”

Darrell’s answer—make pictures—didn’t seem practical. But Gifford had an idea. She encouraged him to apply for a position at the Tri-County Times, a central Iowa newspaper. Darrell recalls his excuses: I don’t have any experience. I don’t have a résumé. And I don’t have a degree in photography, just a degree in Bible. “Why would they hire me?” he asked.

“Because your pictures are better than the ones they publish,” Gifford said.

So Darrell put together a portfolio (“The 10 worst black-and-white photos you’ve ever seen”) and took the short drive to Slater, Iowa, where . . . “the editor looked at them and yawned. I left thinking he was totally disinterested.”

At least that’s the way Darrell frames the anecdote today, always a bit deferential when describing his own work. Here’s the real story. After the photos hit the table, Darrell was hired as the paper’s first full-time photographer.

A year later he enrolled in Iowa State University’s photojournalism program, where he was viewed as a nontraditional student and maybe an incongruity. Married and a Bible college graduate, he was already working full time in the sort of position that most students dreamed of landing after graduation.

His career took him to a succession of Midwest newspapers, including the Ames Tribune, Decatur Herald and Review, and later as photography director for Copley Chicago News Service. He continues to work as a freelance photographer for the Chicago Tribune, where he covers sports, concerts, and human interest stories. He’s won his share of journalism awards, leading to situations like the alumnus award from FBBC—the unnerving walk to the platform, the standing ovation from friends and peers.

Somehow Darrell avoids mentioning the awards when speaking to student groups, but this omission is part of his point. While the students are developing writing, photography, and video skills, they should be thinking about more than building a good résumé. How can these skills be useful in ministry?

When Darrell addresses student groups, he often brings photos from his portfolio, showing how he is applying the same skills when covering stories for the Baptist Bulletin or shooting cover images for RBP products. For this particular media conference he showed a few photos he has taken of famous pop singers in concert, followed by similar photos he has taken on the platform of the GARBC conference. (Yes, he showed his photos of Barry Manilow and Carrie Underwood right before that picture of Pastor Mike Augsburger leading singing.)

At this point perhaps I should explain what Darrell means by “similar photos.” No, the GARBC conference speakers are not rock stars (!), but the technical skills needed to make a good photo are the same for any stage or platform. Open any average denominational magazine—notice how their event photos are shot from the back of the room. See the featured speaker looking drab and out of focus, a tiny dot in the distance.

When Darrell began working for the Baptist Bulletin in 1999, he quickly changed this model, exploiting the storytelling potential of his pictures. He used his camera to show a church association that is alive and vital, a close-up look at real people involved in interesting ministries.

“I’m trying to get people to care about the stories,” he says now. “I want readers to understand the people, understand their motivation. I want the Holy Spirit to use these stories to motivate people who could be doing the same ministry in their own church.”

Yes, every denominational magazine has its share of mission-driven educational articles. Such efforts are conceptual, even theoretical. They are often written by an authoritative leader telling the reader what to think. Not a bad idea, but not complete either. Darrell shows these important ideas in action at the local level, illustrated by the people in our churches. His photos are accompanied by in-depth stories that directly quote the people who are doing the ministry, reporting the ideas in their own voice. This is storytelling in the congregational voice—a Baptist solution for a Baptist magazine.

Just before the alumni awards are presented at the graduation ceremony, the Faith Chorale sings “Great and Awesome God,” reminding me how Darrell and I first met, singing in the bass section of this same group back in the day. As it turns out, everything you need to know in life can be learned in choir practice, like the time Michael O’Doonan gave me this advice: “Kevin, if you finish singing and everyone compliments you on your excellent diction, you have actually failed as a singer!”

Having spent many years trying to master the technical details of singing, I was somewhat shocked by Dr. O’Doonan’s words, a revelation of sorts.

“No, your goal should be different—so people will say, ‘I understood every word you sang.’”

I thought of this on Sunday morning, when Darrell had recovered from the award ceremony in time to return to First Baptist in Arlington Heights, Ill., where he serves as deacon and Sunday School teacher. And he was back singing in the bass section, providing crisp t’s and d’s as I gave the choir its cutoffs.

Years later we’ve come to understand how good photography and good writing are just like good singing. Done correctly, the technical skills do not call attention to themselves. But at the end of the magazine article, the reader says, “I understand.”

This story of “a young man who didn’t know what he wanted to do” has a happy ending, one that Darrell Goemaat told the journalism students a few months ago: “Jesus Christ is the one that I’m living and working for. He is the one that I want to honor and glorify with everything I do and say.”