SCHAUMBURG, Ill.—The General Association of Regular Baptist Churches has signed a letter of intent with a developer interested in purchasing the association’s property on Meacham Road in Schaumburg. 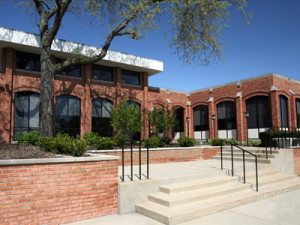 SCHAUMBURG, Ill.—The General Association of Regular Baptist Churches has signed a letter of intent with a developer interested in purchasing the association’s property on Meacham Road in Schaumburg.

The letter of intent culminates a month of decision making for the Schaumburg-based association of 1,200 Baptist churches. Just a few days before the June GARBC Conference, the developer had presented the letter of intent to Michael Nolan, the GARBC’s director of business administration. The GARBC’s Council of Eighteen discussed the proposal and then agreed to present a motion to messengers attending the conference business session on June 25.

Bernie Augsburger, council chair, described the proposal to the voting messengers, inviting Michael Nolan to explain the financial details. Though the developer had presented the offer only a week earlier, it was not unexpected. Understanding the retail development around the Schaumburg property, the council had been discussing this possibility off and on for several years.

Nolan then explained how the Meacham Road property had gained value over the years, situated on what became a key retail corridor near Schaumburg’s Woodfield Mall. By considering a sale of the current property and moving to an existing building in a nearby manufacturing/business corridor, the association would pay off its existing mortgage and net a significant profit. Nolan said that commercial real estate experts have estimated the property is worth $4.3–4.5 million.

Because the project could be underway well before the 2014 Conference, the Council of Eighteen needed formal authority to negotiate a property sale and purchase. The GARBC Constitution requires that the acquisition or disposition of property be authorized by a majority vote of messengers at any annual meeting, or by a mail referendum majority vote of the fellowshipping churches.

Now association leaders are looking for another facility in or around the Village of Schaumburg, preparing for a move expected to occur in the next 18 months. The association provides office space to several affiliated ministries: Gospel Literature Services, an international distribution network for church resources; Regular Baptist Chaplaincy Ministries, which services the military, hospitals, prisons, professional sports, and corporations; Baptist Builders Club, a ministry of providing grants and loans to churches in the association; and International Partnership of Fundamental Baptist Ministries, a network of international organizations. The association also operates Regular Baptist Press, a publisher of resources used by more than 12,000 churches.

Schaumburg’s “village” designation is a quirky name still shared by many Chicago suburbs that have since grown into large cities. When the GARBC moved its offices here in 1976, the “village” name seemed fitting. Other than the new mall, the Meacham road building was surrounded by open land. Local families still kept horses at the boarding stable just north of Algonquin Road. And Village President Bob Atcher was a retired cowboy singer, better known for hosting WLS Radio’s National Barn Dance. 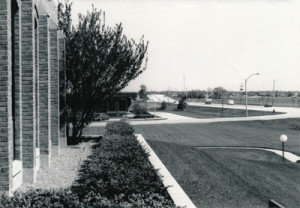 Atcher liked to remind people of his mustang-busting credentials, but he plowed the profits from “You Are My Sunshine” into successful local investments. He became better known as a political visionary who quickly understood how the Northwest Tollway was going to change the rural suburbs. Atcher lobbied developers to build Woodfield Mall in Schaumburg, opening in 1971 and spurring local development. The expanding transportation corridor became attractive to Chicago-based church ministries that were looking to move out of the city. Awana Clubs International built a new building on Algonquin Road in 1970, three miles from what became the GARBC property. The Baptist General Conference had recently moved to nearby Arlington Heights. Then Bill Hybels quit his job at the Awana warehouse to start a new church in Palatine’s Willow Creek Theater.

When the GARBC was looking to move from its cramped Des Plaines offices in 1976, the Schaumburg area seemed a natural fit. Regular Baptist Press had grown to the point where it was renting warehouse space in three locations. The former U.S. Credit Life building on Meacham was available, allowing the association to consolidate at one location. The property was purchased for $770,000, followed immediately by the construction of a $240,000 distribution center, providing 30,000 square feet of space on a four acre site. 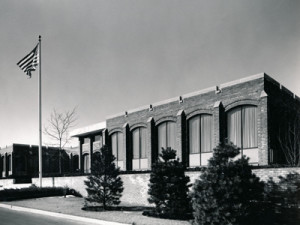 GARBC Resource Center at the time of purchase, 1976

Writing in the Baptist Bulletin, Merle Hull said the Meacham Road corridor was “the most up and coming area in Schaumburg now,” the sort of prediction that seemed to be a sure bet. Schaumburg soon doubled in population.

After Woodfield Mall’s 1991 expansion, it boasted of a staggering 2.7 million feet of retail space, one of the largest in the U.S. With scant apologies to Lincoln or the Sears Tower, a tourism agency named Woodfield Mall the top tourist destination in Illinois, with 27 million visitors per year. And up the street on the other side of Meacham, the GARBC offices quietly sat on a highly public but relatively anonymous corner.

“Meacham Road slices through the heart of Schaumburg’s economic district,” reported the Chicago Tribune in 2000, saying that it had become one of the most heavily traveled roads in the northwest suburbs. The road was widened in 2000, followed by the construction of a regional convention center less than a mile north of the GARBC offices.

As the retail district expanded, so did the GARBC’s ministries. By 2000 it was again forced to rent additional warehouse space, leading to a 23,000 square foot expansion of the Meacham site.

When the economy collapsed in 2008, Schaumburg wasn’t hit as hard as other suburbs. Retail vacancy rates never rose above 10 percent, seemingly impervious to stagnation. When the economy showed signs of recovery, Schaumburg’s retail vacancy dipped even lower, and today is about 6.5 percent, the sort of numbers that ignite continued retail development.

Village officials revisited the Meacham corridor’s master plan, campaigning for a new I-90 exit at Meacham Road to sustain the influx of traffic. The project will begin in 2014 and last about two years. Then the village signaled its intention to rezone all of the property on Meacham Road to a retail/commercial designation. The GARBC’s property (zoned as a planned manufacturing) was grandfathered into the plan, but the village’s proposal immediately attracted attention.

“As soon as they rezoned it, the GARBC switchboard started blinking like a Christmas tree,” says Michael Nolan. “We had commercial retail developers calling left and right.”

The recent letter of intent will be followed by a purchase contract. Nolan expects the due diligence process to take six months; the contract is contingent on the GARBC locating an existing facility nearby.

Kevin Mungons is managing editor of the Baptist Bulletin. This article includes a corrected GARBC relocation date of 1976.