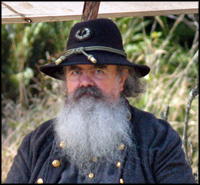 SALEM, Ore.—The General Association of Regular Baptist Churches began years after the end of the War Between the States, but Erik Wood of Faith Baptist Church serves as a chaplain to more than a thousand reenactors of the Northwest Civil War Council. Preaching the gospel at Sunday morning church call and reminding battlefield “casualties” of their need of the Savior are only part of the work. Counseling and personal evangelism are important priorities. Sharing the losses with bereaved reenactors and families as well as the joy of conducting weddings in the period style are all privileges of the ministry too.

Wood has been involved with this unique chaplaincy work for 13 years. He became associated with the ministry through a man in his Sunday School class. The chaplain of the group had become ill, and Wood was asked to take his place.

Wood has degrees from Western Baptist Bible College (now Corban College). Five reenactments occurred during 2009, and Wood is looking forward to the next one, which will take place in Lebanon, Ore., at a city park in May 2010. Wood, who notes that an estimated 150,000 individuals in the actual Confederate army alone trusted Christ as Savior, praises the Lord for the opportunity to be involved not only in the reenactments (he speaks to the men about their eternal destiny during the “battlefields” as they “lie” there), but in the lives of an ad hoc congregation of families.