A Once in Twenty-Five Years Event 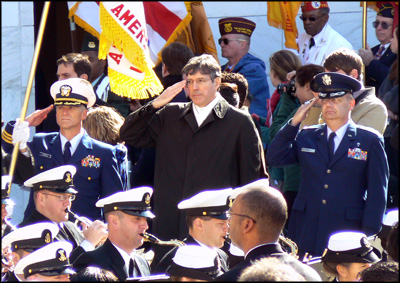 ARLINGTON, Va.—Several GARBC chaplains participated in the Veterans Day National Ceremony at Arlington National Cemetery on Nov. 11, an event hosted by the Military Chaplains Association. Following the Presidential Wreath Ceremony at the Tomb of the Unknowns, Vice President Cheney addressed the audience in the amphitheater.

“No single military power in history has done greater good, shown greater courage, liberated more people, or upheld higher standards of decency and valor than the armed forces of the United States of America,” Cheney said. “That is a legacy to be proud of, and those who contributed to it must never be taken for granted.”

Two chaplains endorsed by the GARBC Chaplaincy Commission participated as part of the Chaplains Honor Cordon. As the Navy band played processional and recessional music, Chaplain Thomas Webber, USN (assigned to the United States Coast Guard) and Chaplain Kenneth Stone, USAFR (assigned to Arlington National Cemetery) saluted during the posting and retiring of the colors.

The Military Chaplains Association, one of 25 members of the Veterans Day National Committee, was the host organization for the event, a responsibility that rotates annually among the member groups. Chaplain John Murdoch was a host for the ceremony, attending as a past president of the MCA. As the director of Chaplaincy Ministries for the GARBC, Murdoch called the GARBC chaplains’ highly visible participation “a once in twenty-five years event.”

“As a nation we are taking time to say thank you to all veterans who have served, and to remember the price of freedom,” John Murdoch said. “It is important for military chaplains to be represented in this event because it demonstrates the importance of the chaplaincy. Having our chaplains present shows the patriotism of our fellowship and the commitment of the GARBC for this ministry.”

The Renew Women’s Conference, an event of the Iowa Association of Regular Baptist Churches, was a time of relaxation and refocusing for the ladies who ...more