KOKOMO, Ind.—While Chaplain John Murdoch's ministry includes much more than his work on behalf of religious freedom, this may be one of his more important activities, because of its long-reaching implications.

KOKOMO, Ind.—You’re an armed forces service member from a GARBC church. During a personal conversation, you speak up for traditional marriage. Later you’re threatened and denied promotion. Chaplain John Murdoch, director of Regular Baptist Chaplaincy Ministries, is able to help.

For 16 years Murdoch has been helping protect the religious freedom of chaplains and service members by giving input through personal meetings, writing letters, and, since 2011, his involvement in CALL, the Chaplain Alliance for Religious Liberty.

While Murdoch’s ministry includes much more than his work on behalf of religious freedom, this may be one of his more important activities, because of its long-reaching implications. As he says, “What happens in the military is ultimately going to impact the churches. We need to understand that the battle we’re fighting right now is not just about the military. It will certainly affect our churches.”

Murdoch has had the opportunity to share his Biblical convictions through letters to the Supreme Court and others about religious issues such as praying in Jesus’ name, the repeal of “Don’t Ask, Don’t Tell,” and the Defense of Marriage Act. Last year, in an effort to combat attempts to limit chaplains’ religious activities to the base/post chapel, members of CALL wrote to the congressional committee. As a result of their input, the 2013 National Defense Authorization Act requires the military to accommodate chaplains’ and service members’ “conscience, moral principles, or religious beliefs,” and it “prohibits the military from using such beliefs ‘as the basis of any adverse personnel action, discrimination, or denial of promotion, schooling, training, or assignment’” (Ronald A. Crews and Douglas E. Lee, “Religious Liberty and Today’s Military,” Baptist Bulletin Plus, March/April 2014). 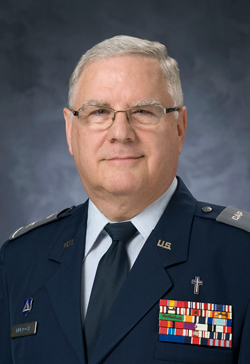 More recently, the endorsing community was given the opportunity to address a revision to a Department of Defense instruction that deals with the appointment of chaplains and the protection of their rights of conscience. Murdoch and other members of CALL have given input that is being reviewed for inclusion in the revision.

So while Chaplain Murdoch is busy ministering to GARBC chaplains and their families, recruiting new chaplains, promoting the Chaplaincy Ministries in local churches, and participating with chaplain/endorser groups, he will also continue to defend the religious liberty of Regular Baptists serving in the U.S. armed forces.

“Everything I do in contacting leaders is totally immersed in protecting the rights of all military personnel, specifically our GARBC chaplains and service members from GARBC churches so they will be able to freely worship, freely share their faith, and freely serve the Lord without fear of reprisal by being assigned extra training, having an assignment withdrawn, or not receiving a promotion because of their faith.”