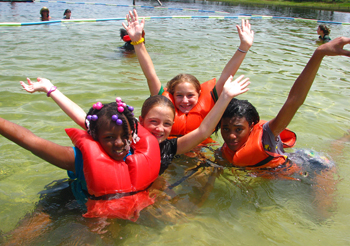 WINTER HAVEN, Fla.—When Hunter, 11, heard about a free week at camp, he packed his bags and showed up at Faith Baptist Church. Hunter had never been to camp before, or for that matter, to Faith Baptist or the club-like ministry sponsoring the week of camp. But he hopped onto the church bus that Sunday afternoon and was soon at Camp Gilead, Polk City, Fla.

Following the first evening service, speaker Chris Elrod issued an invitation, and Hunter was the second to raise a hand in response. His counselor, Marky Rupert, took him aside and led him to salvation in Jesus Christ. And Hunter wasn’t the only one brought into God’s family that night: six other campers made salvation decisions. By week’s end, 14 had come to salvation in Christ!

That week of camp was unique—a first-ever experience for more than just Hunter. The ministry sponsoring the event, Faith’s Extreme (FX), ministers to children and youth from a difficult area of town. FX Director Sean Fielder has invested six years introducing them to Jesus Christ. He has taken a group of teens camping in the mountains for several summers, but the week at Camp Gilead was the debut of “FX Camp.”

The 52 “FX kids” were the only campers for the week. They had full-time camp staff, 13 summer staff, and a dozen volunteers from the church working with them. Senior counselor Caleb Jones says, “The amazing part for me has been getting to interact with people that, in the strictest sense, I don’t normally get to interact with. Jesus said in the Gospels, you have to love the Lord your God with all your heart and you have to love your neighbor as yourself—and to really get to do that is a rare opportunity, and it has been a lot of fun.”

Camp was a unique experience for Hunter’s fellow campers too. None had ever been to a camp. Jerrid, 10, says camp was “actually so much better” than what he’d expected. He enjoyed learning about God, interacting with other campers, and—like the other children—having fun.

The entire experience cost the campers nothing financially. Faith Baptist paid for each camper’s room and board and for activities that cost extra, such as playing paintball and riding a zip line, or having $20 to spend at the camp store. Bessie, 10, says, “I like that we get to go swimming, we get to play on a trampoline (a lot of trampoline), we get to go tubing, and zip-lining.”

As for Hunter, he left camp on Monday, a victim of homesickness. But he could not stay away! He finished the rest of the week as a day camper.

Sean Fielder says, “Let us never say, ‘There is no room; come back later.’ I have learned that if God sends someone our way, it is a divine appointment. Praise God for letting us watch Him save people!”