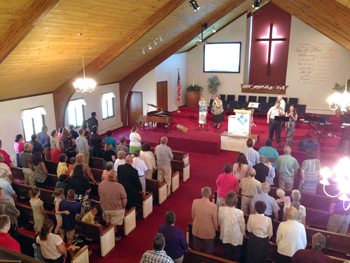 EAST DUNDEE, Ill.—“Thank you for joining us today,” read the July 14 bulletin at Fox Valley Baptist Church. “Whether your time at FVBC was long or short, as a child or as an adult, and however you served, thank you for ‘Coming Home.’ We look forward to fellowshipping with you today.” Guests, regulars, and previous members “came home” to celebrate the church’s 50th anniversary.

Among those returning was the morning speaker, Doug Compton, former pastor at Fox Valley Baptist and pastor of Alpine Immanuel Baptist Church, Comstock Park, Mich., where he has ministered for over 20 years. He spoke on “Keeping Ministry in Focus,” emphasizing that Christ builds His church one soul at a time, and asking, “When was the last time you witnessed to someone or invited them to church?”

Fox Valley Baptist is pastored by Phil Zilinski, who grew up in the area, was saved at age 13, and attended the church in his youth. After Bible college and ministry elsewhere, he returned in 1996 to become the church’s pastor. He and his wife, Tammy, have five children. In addition to his pastoral duties, Pastor Zilinski serves as a chaplain to local police departments and as coordinator of the Dundee Township Peer Jury.

Among its ministries, Fox Valley Baptist has a preschool that meets twice a week and a K–12 Christian school, and it hosts a ministry to its Spanish-speaking neighbors. The entire 50th anniversary service was translated into Spanish for the church’s Spanish ministry partners. Following the service, everyone was invited to share an anniversary lunch.

Next post GARBC to Sell Meacham Property, Relocate Nearby